The bloody battlefields of the American Civil War revolutionized many aspects of warfare, from the use of railroads and the telegraph, to the deployment of submarines. One new technology which underwent its baptism of fire during this conflict, and has become a feature of every battlefield since, was the telescopic sight, commonly referred to as a scope.

The origins of the telescopic sight must be traced to the invention of the telescope itself, which is attributed to a Hans Lippershey, a Dutch spectacle maker, who submitted a patent to the government of the Netherlands in 1608. Galileo Galilei famously constructed his own version the following year for observing celestial objects, and in 1668 Isaac Newton built the first modern telescope.

Prior to the invention of the telescopic sight those using firearms, even for precision applications, had relied on iron sights. Typically composed of two component sights, one at the rear and one at the front, iron sights were tough, adjustable and reliable – to the extent that almost a century after the first rifle scope was developed infamous Finnish sniper Simo “White Death” Hayha still preferred iron sights.

However, the increasing accuracy of firearms, spurred by the replacement of the smoothbore musket by the rifled musket and the introduction of the minie musket ball, led to a need for an aiming system which could match the potential of the latest firearms.

The first telescopic rifle sight was made in 1776 by Charles Wilson Peale, however his model proved unworkable as recoil forced the sight back into the shooter’s eye. The first successful attempt to combine telescopic technology with a rifle is attributed to Morgan James, of Utica, NY, during the 1830s.

John R Chapman documented James’ work in his 1844 book The Improved American Rifle and would go on to collaborate with James, resulting in the production of the Chapman-James sight. In 1855 William Malcolm, of Syracuse, NY, began production of a new model of sight which utilised achromatic lenses and numerous other improvements. His model remains the ancestor of the modern rifle scope.

By the time of the American Civil War a range of telescopic sights were available, such as the Davidson, Parker Hale, those produced by L.M. Amidon, as well as Malcolm’s models.

The potential of utilising the accuracy and range of a rifle usually used for hunting on the battlefield had been recognised during the War of Independence, and as Union and Confederate armies were raised, marksmen were selected for their skill and were formally designated as snipers.

It was among these men that the telescopic sight made its first appearance on the battlefield. Union snipers generally favoured the breech-loading Sharps rifle – becoming “Sharpshooters” – whilst their Confederate adversaries preferred the powerful yet rare British Whitworth rifle, which many credit as being the most accurate rifle in the world at the time and the first modern sniper rifle.

Whilst the primary function of “Whitworth Sharpshooters” was to neutralise enemy artillery crews, during the Battle of Spotsylvania Courthouse in 1864, Union General John Sedgwick was killed by a Whitworth at a range of 800 – 1000 yards, becoming the highest-ranking Union casualty of the war.

When the First World War erupted in Europe in 1914, the place of the telescopic sight on the battlefield was well established. Germany equipped 20,000 of its best marksmen with scoped rifles and dominated this aspect of the conflict, however as the war progressed other powers closed the gap, developing models such as the US produced Warner and Swasey x6 scope mounted on a .30-06 M1903 Springfield Rifle.

The Second World War witnessed some of the most significant leaps forward in terms of the development of rifle scopes. For the first time, optical technology was made available to the general infantryman following the introduction of the Lyman Alaskan 2.5x scope, which could be mounted on the standard-issue M1, and the Zeiss Zielvier 4x which could be mounted on the Karabiner 98k rifle, the mainstay of the Wehrmacht.

The Unertl Optical Company developed a scope that offered an unprecedented 10x magnification, which would later be attached to the US Marine Corps’ M40 rifle and rise to fame in the hands of USMC Sniper Carlos “White Feather” Hathcock in Vietnam.

Perhaps the most significant development of the war in terms of rifle scopes, however, was the Zielgerät “Vampir” 1229. Mounted on the Sturmgewehr 44 – the world’s first assault rifle – and wielded by a wielded by a grenadier known as a Nachtjäger (Nighthunter), the Vampir was an active infrared, or night vision, scope.

Modern armed forces have come to recognize the many advantages of using rifle scopes for specialist snipers as well as general infantry, and a wide range are currently in use across the world. 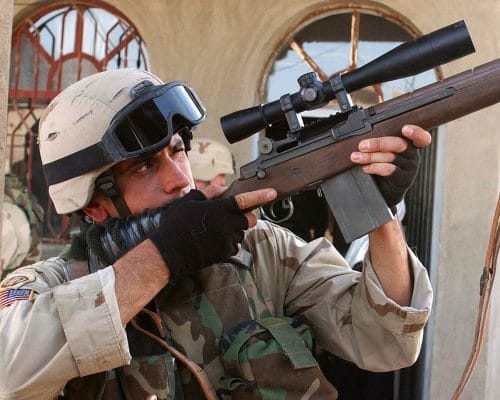 Today’s US military issues the Advanced Combat Optical Gunsight (ACOG), designed for use on the M16 and M4, to its personnel, the British Army’s SA80 rifle has a SUSAT 4x optical sight fitted as standard, Canada’s C7 comes with a Elcan C79 3.4x optical sight, and the Steyr AUG used by Austria and Australia has had a 1.5x optical sight since the late 1970s.

It is the G36 assault rifle used by Germany, however, which, of standard-issue rifles, has most embraced rifle scope technology. It combines a ZF 3x optical sight with an unmagnified electronic red dot sight to create a dual combat sighting system, and has also been adapted to use the Hensoldt NSA 80 II third generation night sight as well.

Rifle scopes have developed dramatically and have become widely used since their inception. Today, scopes offering target acquisition beyond 2,000 yards can be found with relative ease, and the 10x optical zoom first seen as a cumbersome device in the Second World War can now fit in your pocket.

The night vision scopes pioneered by the Wehrmacht were the first in a long line of scopes to work outside of traditional telescopic lenses, and modern scopes can encompass red dot sights, night vision, laser sights and rangefinders, thermal imaging sights, and even computerized digital tracking scopes which can, in a sense, auto-aim.

3 thoughts on “Riflescope Early Beginnings [History and Guide to Riflescopes]”