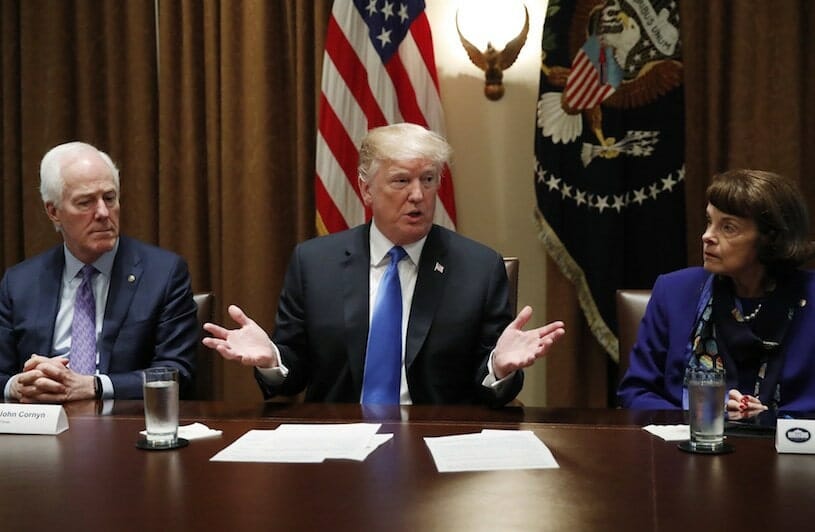 In case you didn’t hear the news, the Trump Administration made a ban on the possession and sales of bump stocks official in December.

And in case you also didn’t realize, President Trump is a member of the Republican Party… the party that is supposed to be against new gun regulations.

President Trump officially directed the Justice Department to ban bump stocks back in February of 2018, but it took until December for the rule to officially take effect. Previously, he also signed the ‘Fix NICS’ bill into law as well that mandated all Federal agencies and states to upload all information gained from gun buyers’ background checks into the background check system.

In his election campaign for President in 2016, President Trump was endorsed by the National Rifle Association, who spent millions of dollars on his behalf. Trump has maintained close ties with the gun rights organization throughout his Presidency, but following the Las Vegas shooting in late 2017 in which bump stocks were used, the NRA came forward in support of ‘additional regulations’ for bump stocks, and Trump then followed their lead following the Parkland shooting in Florida.

If President Trump were to ban bump stocks, as he has already done, then it naturally begs the question if he will continue to support more regulations on firearms and firearm devices, especially now that the House of Representatives will be switching hands to the Democrats.

But with Trump, who has switched his views on numerous policy positions numerous times, it’s not at all difficult to see him committing to universal background checks especially if the new Congress makes it a top priority as Pelosi claims.

Back in 2000, Trump also wrote that he supported the 1994 Assault Weapons Ban signed into law by President Clinton, which banned semi-automatic rifles such as the AR-15 with certain features.

However, in 2015 when he announced his candidacy for President, Trump switched his position, arguing that a renewed Assault Weapons Ban would only affect responsible and law-abiding gun owners and that criminals would get them anyway.

The simple facts of the matter are this:

President Trump has banned the possession of bump stocks and he has signed the Fix NICS Act into law. He has stated direct support for strengthening background checks while falling short of supporting ‘universal’ background checks on all gun sales. He currently remains opposed to a renewed Assault Weapons Ban, but he has supported the ban in the past. And he is also supportive of arming teachers in schools to help reduce mass shootings.

And since Trump is very unpredictable and repeatedly changes his views on several issues, he may or may not proclaim his support for more gun control measures in the future.

What’s all the point of all this? It’s that even though Trump may be a conservative Republican President fully backed by the NRA, it doesn’t mean he remains opposed to all gun control measures.

One thought on “President Trump and Gun Control”