The AK-47 may not be modular like the AR-15 is, but it’s still equally as if not more recognizable. It also has a reputation for being one of the most reliable semi-automatic rifles on the planet. For this reason, alone many American shooters will opt for an AK 47 over an AR.

If this includes you, but if your knowledge on the AK platform, in general, is rather limited, you probably have questions like “what is the best AK-47 that I can buy?” and “what do I need to look for in an AK 47, to begin with?”

Fortunately, both of those questions are going to be answered in this buyer’s guide.

First, we’ll talk about the qualities you need to look for in an AK-47 rifle.

Then, we’ll talk about the top three best AK 47 rifles for the high priced, mid-priced, and low priced options.

The vast majority of AK-47s are manufactured overseas, and the overall quality of the rifle can be largely dependent on its country of origin. 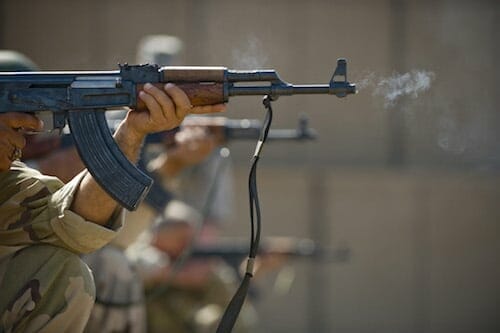 This is because AKs tend to be produced at a higher or lower quality depending on where they come from. For example, generally speaking, AKs produced in China are known for being on the lower end quality speaking.

Meanwhile, AK 47 rifles produced in Russia and Bulgaria have a reputation for being some of the very finest that the market has to offer.

When you buy an AK-47 or AKM rifle, you will have to choose between a milled or a stamped receiver model. 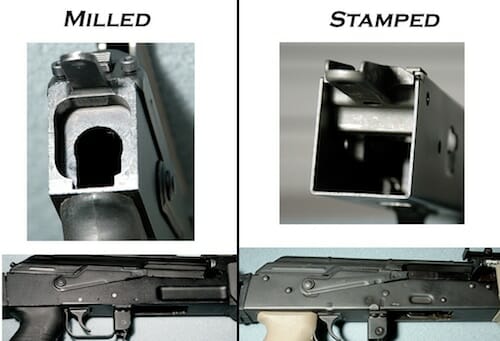 An AK 47 with a milled receiver means that the receiver is machined by the manufacturer from a solid piece of steel.

Milled receivers AK’s will lack rivets and be significantly heavier in contrast to stamped receiver models.

Stamped receiver AK’s, on the other hand, are more common these days. They’re also easier to build. Basically, a stamped receiver means that the receiver has been ‘stamped’ from a thin piece of metal and then bent into a box shape to create the receiver, before being riveted together.

As a result, stamped receivers will have rivets, which makes them easy to differentiate from milled receiver models.

Stamped receiver AK’s are lighter as well as cheaper and easier to make than their milled receiver counterparts. But which is better?

While both work, a stamped receiver AK is generally regarded as being the superior weapon. This is because the AK was originally designed to be produced with a stamped receiver, to begin with. Milled receivers are sturdier and more durable, but they also cost much more and are heavier as was noted previously.

For your first AK rifle, a stamped receiver model will work best and save you money.

The next thing to look for in an AK is the overall fit and function and quality of the action. This will help determine how reliably your AK runs and how effective it is.

To ensure that the gas block of your rifle is aligned properly and that the action is in good shape, grab the bolt handle and then slide it back. Wait until you feel a pressure increase from the recoil spring, and then slowly return the bolt handle to the original position. 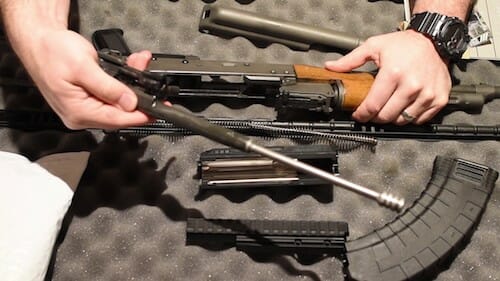 As you do this, take note of whether the handle slides smoothly or roughly. If it’s rough as it slides back and forth within the bolt carrier, it’s a negative sign.

You can also cycle the bolt handle rapidly a few times to check to see if the actions ever get hung up or impeded in any way. If it doesn’t, it’s a good sign that the rifle is in good shape. On the other hand, if the action does get hung up at any point, it’s a sign that at some point the rifle will quit cycling.

Yes, you should feel pressure from the recoil spring. But you shouldn’t feel any resistance or impediments as you draw back and release the bolt handle. If at any point the bolt gets locked up, the rifle is definitely not worth your money.

Something else you can do to check on the quality of the action will be to remove the top cover of the AK and inspect the hammer. Specifically, you want to confirm that the hammer is not wearing unevenly. There should be smooth wear marks on the face of the hammer.

Alignment of the Front Sight on an AK 47

Many budget AK’s especially will have an improperly aligned or canted front sight. This can greatly affect your accuracy when shooting the rifle.

The accuracy of the AK platform in general often receives knocks in comparison to the AR-style of rifle. This is why having a properly aligned front sight will be so important to ensuring that your AK is platform enough for your needs.

Shoulder the rifle and line up the sights to confirm that the front sight is not canted in any way. You want the front sight to be aligned with the receiver properly in order to get a truly accurate rifle. 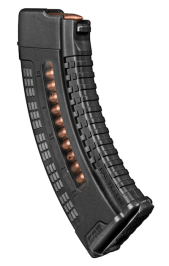 Last but not least, insert a variety of different magazines into the rifle and check to see if there is any resistance at all when inserting them (of course, make sure that the magazines are unloaded and that you have the permission of whoever is selling you the rifle).

The magazines should fit very easily into the rifle with no resistance whatsoever. However, you also want to make sure that they aren’t loose. Shake the rifle around, and if there’s any rattling caused by the magazine and the magazine well, that’s a problem.

Now that we know what to look for in an AK rifle, we can dive into the best AKs you can buy in the high, mid, and low-priced options:

We recently received an AK 47 from our friends at Palmetto State Armory.  We were really impressed. So our first and probably favorite of the best AK-47 rifles will be the PSA AK 47.  You can check out our full review of the PSAK-47 here.

Since we have an entire article focused on the PSAK 47 I will only hit a few of the highlights here.  Unlike other affordable AKs, which use Cast parts, the PSAK-47 GF5 features a Hammer forged front trunnion, Barrel, Bolt, and Bolt Carrier.

One of the best features of the PSAK-47 is its trigger. This rifle uses the ALG AKT Enhanced Trigger, which is incredible, and miles better than standard AK-47 triggers.

We could and have gone on and on about this AK-47.  Check out the complete review.

The Arsenal SLR and SAM series of rifles are made in and imported from Bulgaria and are routinely regarded as being some of the finest AK’s in production today.

That being said, these rifles also command a premium price and regularly cost between $1,000 to $1,500.

If you want to buy an Arsenal AK-47 at the cheapest price point, you may want to go with the SLR107. This is an excellent AK rifle that can be had for around a thousand dollars. There’s also the SLR107R, which has a fixed stock. 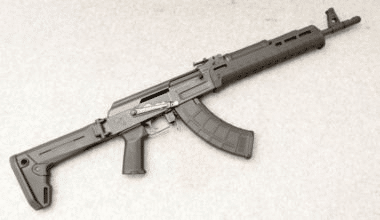 If you don’t have a couple thousand dollars to spend on an AK, but if you also don’t want to buy the cheapest AK rifles on the market, then you should look at a mid-priced option such as the Century Arms C39V2.

The C39V2 will cost you around the $850 mark (maybe a little less depending on where you buy it from).

These rifles are 100% made in the USA and come with a variety of neat features including optic side mounts and Magpul MOE furniture (though there are also C39 V2s made with classic wood furniture as well).

If money is really tight and you have to go on a serious budget, then you’ll be hard-pressed to ignore the Romanian made WASR-10.

This is one of the most widely available AK-47 rifles produced. It is also most well known for being one of the cheapest options available.(a WASR 10 rifle should cost you around $800 or so).

That being said, quality control on the WASR-10 rifles is not exactly the greatest. Which is why you want to carefully inspect your rifle (based on the guidelines we outlined and discussed above) before you move ahead with a purchase.

For instance, it’s not uncommon for WASR-10 rifles to have slightly or wildly uncanted front sights. So that’s something that you will need to take into consideration.

That being said, one thing that the WASR-10 does have going for it is reliability and durability. These rifles regularly have tens of thousands of rounds sent through them without any issues or signs of serious wear whatsoever, so you’re definitely getting a reliable gun for the money.

In conclusion, the first AK 47 you buy should meet the following criteria:

Your goal then should be to buy the best AK-47 you can for the money.  That is what you can afford to spend. The specific makes and models in the above price ranges should work for you so long as you inspect the rifles to confirm they are in good condition.