Is This the Ultimate AR-15 Rifle of All Time?

A deeper search reveals that around the same year, M400s were bought by a wide variety of state actors worldwide.

While only FN and Colt supply AR-style rifles to the U.S. military, plenty of American gun manufacturers supply arms to other militaries worldwide. Czech and Georgian units are known to use Bushmaster carbines, a large stockpile of Georgian Bushmasters was captured during the 2008 war with Russia. However, in recent years, Sig Sauer, Inc. has stepped into the market, competing with Colt, Bushmaster, and smaller companies like Rock River Arms.

Sig Sauer, Inc. makes a variety of AR-15 style rifles, including the gas operated SIG516. But in direct competition with the various Colt M4s is the Sig Sauer M400, their own take on the direct gas AR-15 rifle.

The original M400 is a fairly standard AR-15. The primary difference it has versus a Colt M4 is a slightly altered lower receiver, which has built-in sling swivels at the rear of the lower receiver and slightly beefier/flat fencing for the magazine catch. Original export M400s lack a free float barrel and feature a standard “A” frame front sight and a carbine-length gas system.

Ironically, most police and military users of the M400 are rarely seen using these built-in sling swivels. Internally, the M400 has a special support pin in the locking lug recesses that keeps the extractor pressed against the cartridge to prevent a blowout in the event of a squib load.

The M400 was made notorious during the battle of Mosul. Iraqi Special Operations Forces ordered a large number of the rifle, and many photos of ISOF members during the battle show them with the M400, though other AR-style rifles are present.

A deeper search reveals that around the same year, M400s were bought by a wide variety of state actors worldwide. Oman appears to have bought them for the military (while their police forces were buying Colt carbines). The Philippines also put in a contract for 27000 M400 rifles in 2016.

However, all these orders are relatively small and appear only to equip small units and are not military-wide purchases They were likely done by users who were already familiar with the AR who wanted newer rifles to replace their older worn out rifles.

From looking at Sig Sauer’s approach to winning U.S. military contracts, these replacement contracts were probably won by providing a comprehensive post-purchase service plan and a price lower than that of the competition.

Sig Sauer revamped the M400 around 2017 with a free float rail and low-profile gas block to win a new batch of contracts. This time, the contracts appear to be domestic, with Detroit and Philadelphia departments adopting the rifle. Oddly, despite the full-length free float rail, this new M400 retains a carbine-length gas system. In 2017, the U.S. military (specifically USASOC) was already looking into mid-length gas systems in the Upper Receiver Group – Improved (URG-I) program to reduce recoil and lessen wear on parts.

Sig Sauer would only bring the mid-length gas system to the M400 in 2019 with the M400 “Tread,” a budget civilian version of the M400 meant to compete with other cheaper rifles. It’s unsure as to whether police and military M400s have this new mid-length gas, or if it’s a civilian only upgrade.

The main source of this article: Is This the Ultimate AR-15 Rifle of All Time? 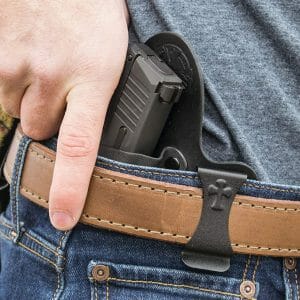