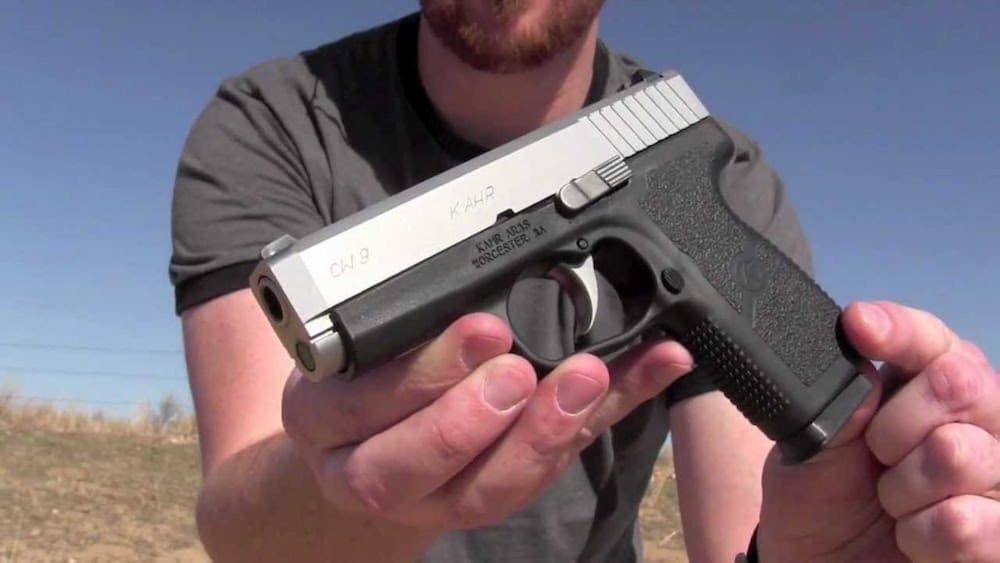 What do all of these guns share in common? That’s right: they’re all single stack 9mm autos, and they’re each a perfectly viable option for concealed carry or EDC as well.

In fact, it was the Kahr pistol that really set the stage for the 9mm single stack to begin with back in the 1990s.

Let’s dive deeper into Kahr and the CW9 in particular:

The Story Behind the Kahr Pistol

Kahr Arms is owned by Justin Moon, a firearms enthusiast who who at the age of 18 first received his concealed carry license.

Moon was disappointed by the lack of a sufficient caliber in small, single stack semi-automatic handguns. 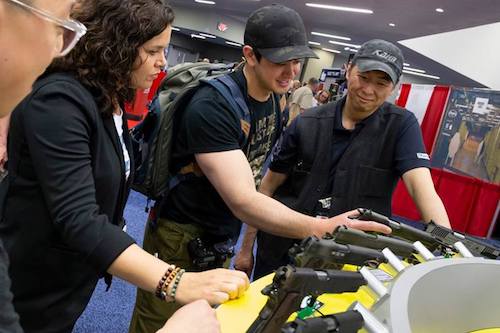 Back then in the 1990s, your concealed carry options were really limited to .38 snubnose revolvers, the Walther PPK-type pistols in .380, the AMT Backup, Beretta Cheetah .380, or a 1911 Commander/Defender in .45 or 9mm if you were willing to carry a larger gun.

Moon wanted to make a single stack, compact 9mm pistol that would be reliable, high quality, and easy to carry inside the waistband.

The result was the Kahr K9 9mm, first produced and released in 1996. The K9 was a steel farmed pistol, with a DAO hammer fired trigger operation and single stack 9mm magazine.

The K9 was successful and spawned many different polymer framed variants as well, including the P series, PM series, and the budget CW series.

The Basic Design of the Kahr Pistol

The Kahr pistol is a Browning locked breech design. It’s a DAO weapon, and in that manner acts very similar to a double action only revolver with a long but consistent pull each time you pull the trigger. Kahr designed the pistol to have 3/8 inches of trigger travel. 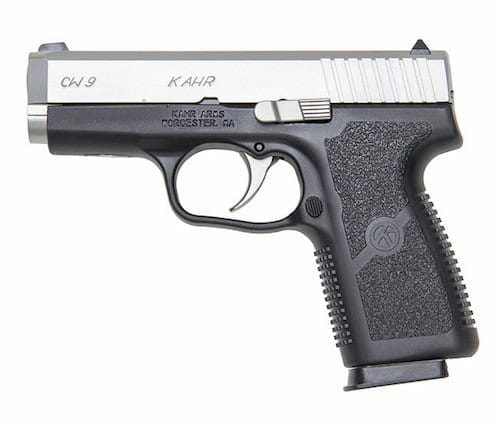 While the K series of Kahr pistol was steel framed, polymer framed models such as the PM or CW series have steel inserts installed on the sides the polymer frame for the slide.

The K9, which was the original Kahr pistol, was a 9mm pistol that was the same size as the competing .380 pistols such as the SIG P230, Walther PPK/S, Bersa Thunder, and the Beretta 84/85. The 9mm is a much more powerful round than the .380, as it creates a larger wound channel, has a faster velocity, and has more energy behind the bullet.

This meant that the K9 was one of the most advanced concealed carry pistols of its day. These days, obviously, 9mm single stacks are the norm, but back then in the 1990s it was a surprisingly new concept.

Kahr’s primary lineup now mainly consists of polymer framed pistols like the rest of their competitors. The polymer versions include the PM, P, and the CW series. Out of these, the CW is the best option for those who don’t have a lot of money to spend.

Characteristics of the CW9

The Kahr CW9 is a polymer framed pistol and is the budget model of Kahr’s line up. It’s routinely available for around two thirds of the price of the larger P series of pistol. 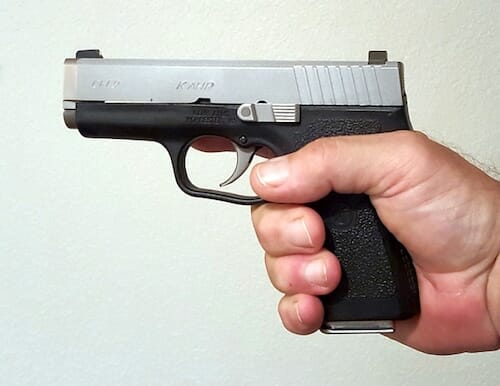 Now you might be wondering if the quality of the CW9 is less than the K or P series in order to save on costs.

Well, there’s no denying that the CW9 is not as ‘nice’ of a gun as the K9 or P9. Nonetheless, Kahr claims they made absolutely no sacrifices when it comes to the reliability or the accuracy of the weapon.

The CW9 is a little uglier and less refined than its more expensive counterparts. For instances, the markings are stamped and not laser engraved. The milling and finish are also less refined as well. Sharp edges are also present on the magazine, forcing you to have to smooth those out themselves.

The CW9 has a black polymer framed with a matte silver stainless steel frame and barrel. The front sight is made out of polymer, like the frame, and it is built into the slide of the weapon. The rear sight has been dovetailed and is constructed out of steel. 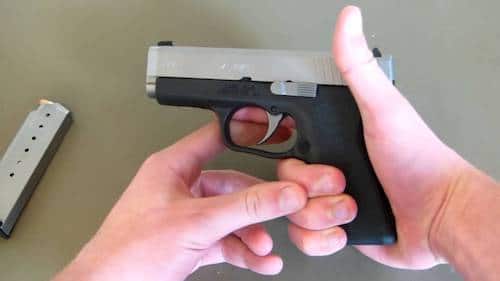 As far as magazines are concerned, the CW9 will accept the same magazines as the P series, so locating extras at reasonable prices should not be much of a problem for you. Some magazines will have a polymer baseplate to extend the length of the grip and give you a full firing grips. The standard capacity is 7 rounds, but 8 round magazines can also easily be found.

As you would expect from a single stack 9mm, the CW9 is very thin, and measures just 0.9 inches. With a good holster, it’s very easy to conceal carry. Total weight of the pistol is just 15.8 ounces, which isn’t much more than a Smith & Wesson Airweight revolver such as the 442 or 642 revolver.

One of the fallacies that exists with the CW9 is that many people believe the frame rails for the slide are built out of polymer. In reality, the rails are made out of metal with polymer coverings, and the rails near the back of the pistol are clearly metal.

Kahr recommends a break-in period with the CW9, along with other Kahr pistols, in order to ensure optimum reliability for concealed carry. According to the manual, two hundred rounds of 9mm will be necessary for the break-in, so don’t be surprised if you encounter stoppages or failures of some kind during this period.

The Kahr CW9 is a solid choice for a concealed carry 9mm or even just for a 9mm in general. You can certainly use it for concealed carry like it was intended to be used for, but it could also be used for home defense or as a car defense gun as well.