Vortex are becoming quite well known for their range of optics, whilst not letting it go to their head.

Still based in the heart of Wisconsin, the company seem to have their priorities in the right place – instead of bragging that their scopes have obscure and useless features, they produce optics that are dependable, easy to use, and will put up with many years of abuse.

The StrikeFire II Red Dot Scope is one of their newest offerings, and is a pretty good scope for both beginners and professionals alike. The scope is sold as ideal for shooters needing the maximum field of view, and as being easy to adjust for both day and nigh-time shooting.

It’s also not that expensive, coming somewhere in the mid-range for this kind of scope. If you think that sounds too good to be true, we did to. And so we ordered one, and put it through its paces.

Our first thoughts, when the scope arrived, were to do with its size.

It’s very lightweight, at just 7.2 ounces, and just a little over 5 and a half inches in length. If you own a relatively short rifle, or are looking to get a scope for a beginner where size and weight are paramount concerns, this is great.

I guess that some people would not be that impresses by the features included with this scope. It lacks many of the advanced features of more expensive red dot sights, but there is a certain beauty in its no-nonsense design.

It’s really easy to set up and use – more on that in a minute – and the fact that there are no complicated optical systems involved means that this scope will go out of alignment a lot less frequently than the competition.

The Vortex Strikefire 2 offers exactly what this kind of mid-range scope should. It’s simple design consists of a red dot sight with 1x magnification, and a 30mm objective lens.

The scope comes in two configurations, and you can choose which you would like at the time of ordering. The first is a red and green reticle, the second a single red dot. Both are suitable for night-vision shooting at their lowest intensity settings. 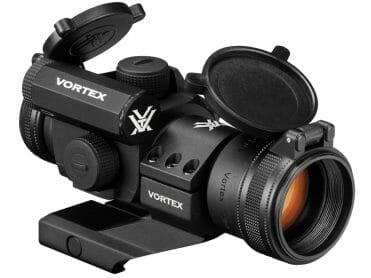 The scope is finished with a solid black coating, which in our tests seemed to resist scratches pretty well. The housing, in general, is nice and thick, and I think you’d have to treat this scope pretty badly in order to damage it.

Extra options include a x2 doubler, which attaches directly to the optic. Inside the box you’ll also find a pair of flip-up lens covers, a wrench for fitting them, and a CR2 battery for the dots.

It’s waterproof, but only to a point – don’t think that you can drop it in the lake and it will keep going.

Nitrogen gas inside the scope means that it will not fog up, and the scope is actually surprisingly adjustable for a red dot sight at this price, featuring a full 100 MOA adjustment range with ½ MOA increments.

Like everything else about the StrikeFire II, setting it up on our weapons was super easy.

The guys at Vortex seem to have taken some of the best scopes around at the moment, and simplified their design in order to save costs. This results in a scope which is admirably simple.

The scope will easily fit onto any 30 mm scope ring, but also comes with a high-rise mount for flat topped AR’s. Though we didn’t use it, this could be really handy if you want to use two sights on your rifle.

Adjusting the scope mount requires some basic tools – if you’ve got a specialized scope mount tool, then great, but otherwise a coin will do just as well (just be sure not to make the classic mistake of wrenching too hard when mounting the scope).

I know that all scopes used to require tools like this, and that we have recently been spoiled by fingertip turrets, but I have to admit that having to use a tool annoyed me a little bit. That said, I guess you only have to do this once.

Zeroing the optic is as easy as fitting it. One of the advantages of the simple optical design used here is that you don’t have to line up numerous lenses and reticles. Instead, you are just adjusting one.

The MOA adjustment is smooth, and feels pretty solid.

All set up, we took the Vortex StrikeFire II out for a live test. I chose a target, brought the scope up to my eye, and … immediately encountered a problem.

It’s not a huge complaint, but when I was trying to change the reticle from red to green, I could not make the button work.

After a bit of practice, I was able to do this without taking my eye from the scope, but bear in mind that it’s going to take a few times out shooting to get used to this. This is something that other people have mentioned also.

That minor problem aside, the performance of the rifle was pretty good. The first thing to note here is that the scope uses both eyes for aiming, a feature that Vortex claim give the shooter a broader range of vision and therefore quicker target acquisition.

This is true, as far as it goes. With both eyes open, you are able to command a much greater range than with narrower scopes. The problem here is that the light transmission through this scope is less than ideal.

Taking my eye from the scope, and then looking through it again, looking through it almost felt like I was wearing sunglasses it was so dim. Whilst not a problem in bright sunlight or when using night-vision, if you’re out hunting at dusk this is going to severely limit your effectiveness.

Beyond this, scope operated really well. The controls are well placed, save the button for switching the reticle. A particularly nice feature is the dedicated button for switching between night vision and normal modes, which is perfectly positioned for right-handed shooters.

Obviously, reviews like this cannot test the long-term reliability of any scope, because to do so I’d have to use it for 10 years, by which time the review would be out of date.

So far, however, the scope has kept its zero perfectly, despite multiple trips and a couple of accidental knocks.

So far, the guys at the GND office have probably put about 1000 rounds of standard PMC ammunition through the AR this scope is mounted on, and this has not affected it in the slightest.

The only complaints, beyond the slight niggles I’ve already mentioned, has been the fact that the front of the scope reflects an awful lot of light from its front surface. This is likely the cause of the darkening I’ve mentioned, but also has another unfortunate consequence – on a sunny day, anything you are hunting is going to see you coming a mile off.

The battery life of the StrikeFire II is advertized at 6 months, which is significantly above that of many similar optics. Given this, the red dot is surprisingly bright on the higher settings.

Should You Use This Scope?

I would recommend this scope for quite a variety of users. Whilst not having all the bells and whistles of more expensive scopes, it still comes with a variety of features that are unusual on a scope at this price.

The scope comes particularly recommended for beginner shooters, because the lightweight and simple design allows them to focus on what really matters – improving their technique – rather than messing around with a load of fancy optics.

That said, I wouldn’t shy away from recommending this scope to even quite experienced marksmen. If you are used to a more fully-featured scope, the StrikeFire II may feel like a step down, but on the other hand if you are an experienced hunter you are likely to be able to shoot well without fancy optics.

In addition, the no-nonsense design of this scope means that it will hardly ever go wrong.

Overall, I was impressed. The StrikeFire II is definitely the best mid-range scope we have tested, for the simple reason that it does the basics well, even if it’s not quite as popular as a few other options such has the Aimpoint Pro.

Fitting it to a rifle is easy, and once on there it will keep a zero for ages. In the race for companies to design ever more advanced optics, simple functionality like this is often forgotten about.

There are a few minor niggles. The first is that switching the sight between red and green dots is a bit awkward at first, largely due to the poor button that is used to do this.

A larger problem, but not necessarily a deal-breaker, is the poor light transmission, and the fact that the front lens is quite reflective. Those problems aside, this is a solid scope.

If you are looking for a red dot sight that is night-vision capable, easy to fit and adjust, and will give you many years of reliable service, you can do worse than taking a look at the Vortex StrikeFire II.