One of the safest places to go nowadays is a forest.

True, there are many aspects of wildlife roaming around within those trees that are rather dangerous, but the chances of running into something of that caliber is pretty slim. Some people hike the trails around their homes and do not as much as run into a rabbit, squirrel, or maybe the occasional deer.

However, the chance of running into something more dangerous is still there, so it needs to be acknowledged before you step into the woods for a measured length of time.

Therefore, it is wise not to go into these depths without some kind of safety precaution in place. Many strategies exist for self-protection in the deepest parts of a forest, and the first step usually means having to know the enemy.

It is important to understand that this conversation is not just about going hunting. Anyone who spends any amount of time in the woods, whether it be for fishing or hiking or camping or hunting, needs to be able to protect themselves should danger strike. The list of animals that could pose a danger is a short one, so there is not much really to learn.

Most Dangerous Places for Bear and Mountain Lion Attacks

This task is easier in certain part of the country as the variety of dangerous wildlife changes between locations. For example, people in the Alleghenies do not have to worry about grizzly bears like those ones found in the Northern Rockies. When it comes to felines like mountain lions, they usually keep to the western parts of the United States.

The largest worries along the eastern part of the country are black bears, which are more likely to run away than entertain the idea of attacking.

This statement does not mean that black bears will not attack a human. Most attacks by black bears are based on predatory nature, unless a Mama bear feels her cubs have been threatened.

This last part is true of all Mama Bears, really. However, if a predatory notion brings a black bear to attack you, then the best advice is to fight for your life because that bear likely wants you for dinner.

On more than one occasion, I’ve encountered a black bear while fishing near my cabin in Idaho. Let me just say… I’m an old fart and my reaction time isn’t what it used to be. While I love to read stories of young guns defending themselves and others against bears, I have no inflated ideas that I’d be able to do the same.

So, when a bear comes near I run or hide, as quickly as I can.

Here’s a chart if you’re unsure of which bear is which. 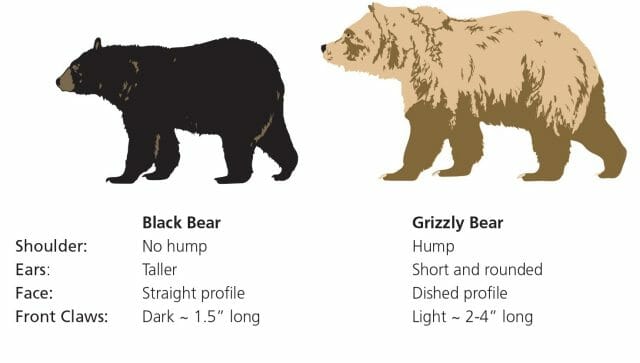 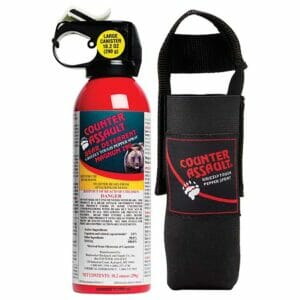 While this first tactic might seem a little silly, it is at least a best place to start. There are actually bear spray repellents that can be used. It does not have the same strength as pepper spray, but it has to contain at least two percent Capsaicin in order to be effective.

This spray often works as a basic mode of defense because the bear’s head is the one thing out in front charging at you, well, head first.

Therefore, the spray has a pretty good chance of making its way into the bear’s eyes. The closest a bear is likely to come at this point is two yards before the spray has a chance to go to work. Otherwise, that bear is going to have a field day pouncing on you before devouring its prized meal.

In most cases, the orange cloud produced by the spray can will be enough pain to make a bear drop. The most effective brands of this spray will have a ten to thirty foot area of effect. 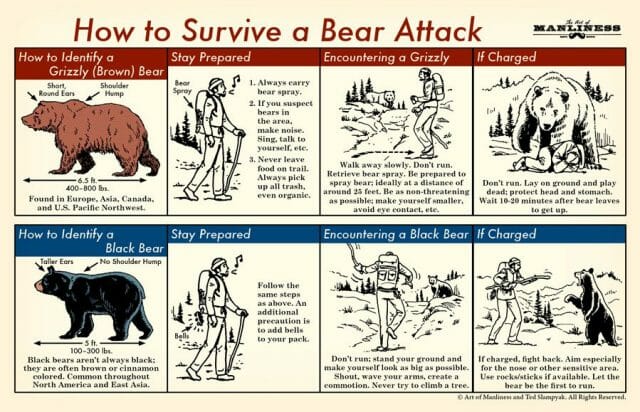 At the same time, pressure being released from the can is rather strong, so two hands will be needed to hold onto it properly for the duration of time that needs to pass in order to create that protective, orange cloud. Furthermore, the aim has to be rather low but not too low in order to make sure the spray lands right in the bear’s face.

How Far Away Should You Spray Your Bear Repellant

There are a few things to worry about when it comes to using the repellent spray. First and foremost, ask yourself how accurately you can aim under this kind of pressure. Also, is the spray can’s output strong enough to penetrate the air before the bear makes a successful deathblow?

What is the Best Thing to Do If a Bear Attacks

The most obvious question, though, is this one: what do you do if the bear drops once the Capsaicin penetrates its field of vision?

There really is only one other option to contend with when it comes to being protected against dangerous wildlife in the woods. Frankly, the answer is quite obvious: carry a gun with you.

Just like some people do in larger metropolitan areas for the sake of safety, you really should not go too deep or spend too much time in the woods without a gun as part of your packed goods.

When you think of shooting a bear, a rifle of some kind might be the first gun that comes to mind as the best option. One such gun is a .357 H&H Magnum. Sadly, it is quite the hefty gun to tote around when fishing or hiking. 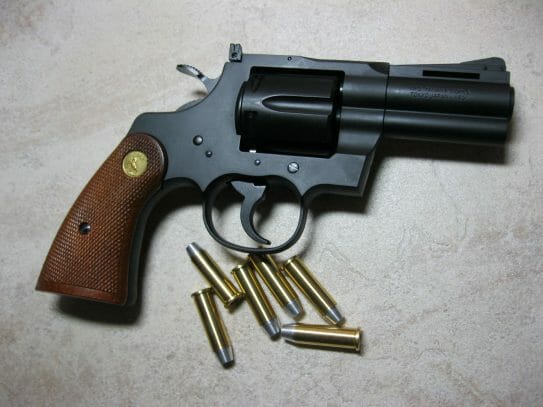 Some people might even find it a little weighty to take on a camping trip that does not revolve around hunting. At the end of the day you need something that packs power. Don’t expect to defend yourself with a pellet gun, even if you have the best air rifle on the market.  Therefore, here are a few more things to consider about protecting yourself against a bear in the woods.

Some people underestimate the power that a bear can produce. Estimating their speed is also a bit tricky because of their size. On the contrary, these beasts can move fast and hard within the blink of an eye.

Therefore, having the right gun on hand can mean sparing your life in the few seconds you might have to react. Since longer guns are practically out of the question because of their weight, the only other logical option is a handgun.

The key here is to find as powerful of a caliber in a gun that you can manage. In most cases, a .44 Magnum will be able to do the trick so long as it is loaded with either .454 Casull or .500 S&W.

It is important to note that this gun has a rather large frame, so it might be difficult to carry or handle. It is the best bet against larger, dangerous wildlife. In some instances, only a riffle or something more powerful than that will take down bigger animals like brown bears from Canada.

When it comes to unloading some metal into a bear, there are two places that are the best to take aim. 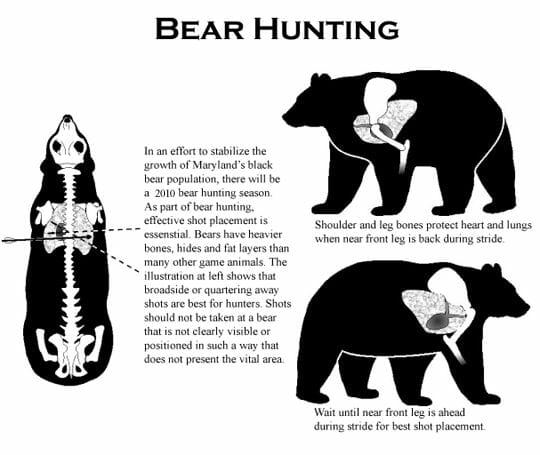 Obviously, the lowered head is a good idea. A handgun might not be enough to penetrate the bear’s skull, but unloading as many rounds as possible to this area will heighten your chances of survival. Bullets that miss the head are likely to land in the large hump above its head.

While this part of the body is full of muscle, the bullets will cause a great deal of pain in this part of the body because of that same factor. Bullets hurt more in muscle than they do in fat. However, the closer that bear comes to you, the more and more you need to aim for its face. Go for the eyes and the mouth where possible. 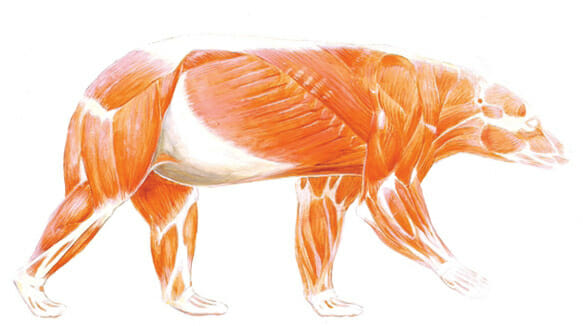 Make sure you are not under the bear when it drops dead, though. The massive amount of weight that will drop on you can be deadly in itself. Also, you can likely forget scrambling out from under that weight once its pressing the life out of you.

Positioning your bear spray and firearm on your person when you are out in the woods is almost as important as having the right kind of firearm in hand. While this next statement might be obvious to some people, it might not be so much to others: do not place the spray or firearm in your backpack.

The short amount of time you have to react to a charging bear is minimal, so there just is not enough extra padding of time to be able to dig through a backpack in order to find what you need most.

There are a few logical places to put your spray and firearm, though. The spray should be clipped to your belt loop, the outside of a hip pocket, or even better yet, located on a shoulder strap of your backpack.

If you aren’t sure of what to do, here is a handy chart showing you all the different animals and what to do. 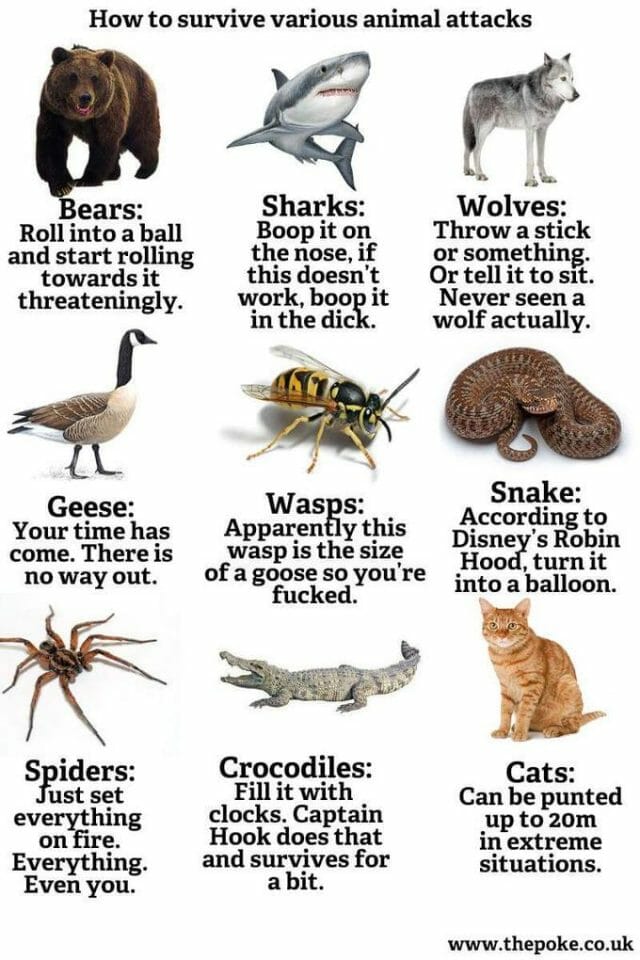 Using a Pistol and Holster to Defend Yourself

Clipping this can onto one of these places is better than tucking it in a pocket completely. It shaves vital seconds off a response time and prevents the risk of the spray exploding in your pocket. Also, you need to make certain that your dominant hand has the most ease of access to the spray for the sake of an effective draw.

Much the same needs to be said about your firearm. It should be placed within easy reach of your dominant hand. An outside the waistband holster at the hip is the most natural option, and I prefer using OWB Kydex holsters when hiking as they tend to be more comfortable and don’t chafe my skin. It can also be holstered either across a shoulder, under an arm, or at the small of the back. However, you need to take time and figure out from which location you can draw the fastest and with the most ease of comfort and accuracy. 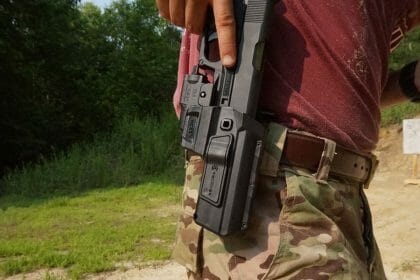 The faster you can move from drawing to taking aim and then firing the faster. Therefore, you should really spend some time at a firing range becoming familiar with this firearm before taking it into the woods. This arrangement will make you the most ready for taking on danger, should it be provoked to strike.

Other Important Camping Tips to Keep in Mind

It is important to understand that this conversation is not just about going hunting. Anyone who spends any amount of time in the woods, whether it be for fishing or hiking or camping or hunting, needs to be able to protect themselves should danger strike. The list of animals that could pose a danger is a short one, so there is not much really to learn.

Take care of your health by packing clean water and healthy snacks. Don’t just “rough it” and sleep outside; get yourself a decent sleeping bag. Or, better yet, invest in a camping mattress that doesn’t sacrifice comfort. You’ll wake up the next morning feeling refreshed, able to fend off whatever dangers you encounter along the trail.

If anyone has any additional tips please feel free to post them below. Thank you!

3 thoughts on “How to Keep Yourself Safe on the Trail”