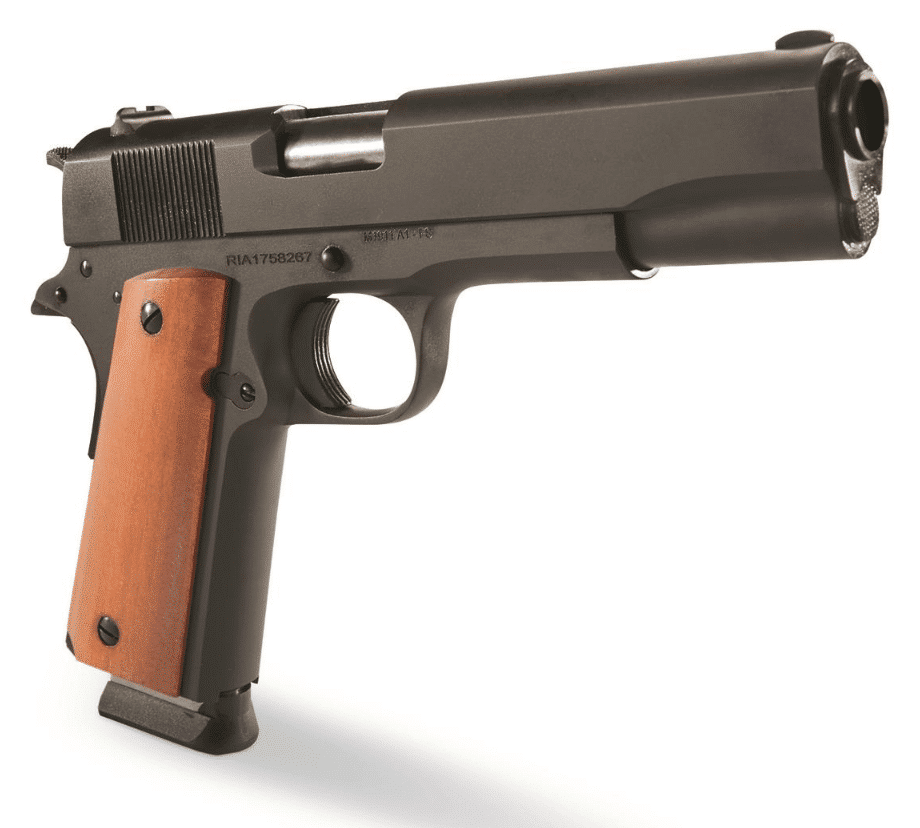 In another article, we talked about the Colt 1911 and the many different variants of the 1911 that Colt offers for sale.

Colt has been manufacturing 1911 pistols longer than any other manufacturer, and to this day, they are one of the highest quality factory 1911s that money can buy.

But there is also one major negative to Colt pistols: they’re extremely pricey. A brand new Colt 1911 fresh out of the factory will run you close to if not over a thousand dollars. And not everyone who wants a 1911 has that kind of money laying around.

If you find yourself in this situation, where you really want a 1911 but are short on cash, you basically have two options: 1. Be patient and save up for a Colt or a similarly priced model from another manufacturer, or 2. Spend your money now on a budget model.

One of the most prominent examples of a budget 1911 is the Rock Island Armory (RIA) 1911. These pistols are commonly available in the $400 to $500 range, or around half the price of a Colt.

Well, we’ll see if we can find out. We’ll talk about some basic facts of the RIA 1911, what you will get out of the box, the overall fit and finish quality, its shooting and reliability performance, and a final list of its pros and cons. 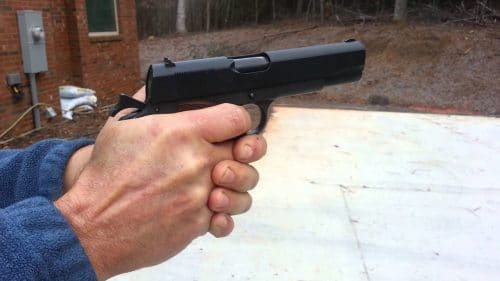 Rock Island Armory currently produces a handful of different 1911 models, including a G.I. model (which most closely resembles the M1911A1 that saw service from World War II to Vietnam), a Commander model, a Compact model, a Match model, and a Tactical model.

All Rock Island Armory 1911s are manufactured by Armscor in the Philippines and then directly imported by Armscor into the United States (specifically through Nevada).

All RIA 1911s are built out of 4140 chromoly steel using CNC equipment and are designed to be entry level models on the 1911 market, though the Match and Tactical models sport features not found on the standard G.I. model (such as a beavertail grip safety, ambidextrous extended thumb safety, skeleton hammer, an improved trigger and barrel, and so on).

For the purposes of this article, we’ll focus on the standard G.I. model.

RIA also currently produces 1911s in each of the following calibers:

When you purchase the RIA G.I. 1911 you’ll be given a hard plastic case. This itself is nice, since many major manufacturers (such as Ruger) ship their handguns in disposable cardboard boxes. 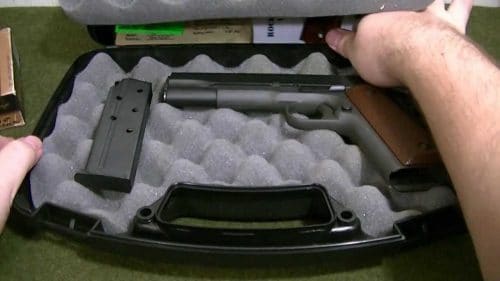 When you open the case, you’ll find the GI 1911 with its parkerized finish (which is more durable than bluing) and traditional GI style sights. The grips will be constructed out of wood to enhance its traditional look.

The grip safety is slightly extended in comparison to the original M1911A1 that saw service with the military. This is done to prevent, or at least minimize the chances of, hammer bite.

RIA only ships one magazine with the gun, which admittedly is a bit of a disappointment since most gun manufactures send at least two magazines or sometimes as many as three.

Let’s talk about the fit, finish, and overall build quality of the RIA 1911 in greater detail.

One of the biggest cost savings in the RIA 1911 comes in the form of the parkerized finish. While this finish is admittedly rather dull and crude looking, it actually provides better protection against rust and moisture than standard bluing does. Original M1911A1 pistols used by the military had the parkerized finish as well.

You will also notice some small machining marks on the RIA 1911 as well, but nowhere is the parkerized finish too thin that it would wear off quickly. One place where an RIA GI 1911 will commonly have machining marks is on the curve at the top of the slide.

One issue that many people have with the RIA 1911 is the lack of a bushing to contain the recoil rod and the barrel. What this means is that you will have to disassemble the RIA 1911 in a slightly different manner than you would most other 1911s (you’ll likely need an extra tool such as a paperclip or safety pin in order to field strip it). Thankfully, there are many online instructions and YouTube videos on how to do it, and you can always refer to the RIA 1911 manual too of course.

The sights on the RIA GI 1911 are also minimalistic, which is to be expected on any G.I style of 1911. While these sights are low profile and thus less likely to snag when you draw the weapon, it won’t be as easy to line them up in order to acquire your target. Fortunately, if it’s something that bothers you so much the sights are nothing that a good gunsmith can’t replace for you.

One of the biggest pros of the 1911 is the light and crisp single action trigger pull. While you may suspect that a budget 1911 such as the RIA offering would have a longer and mushier trigger pull for cost savings, this is simply not the case. The RIA G.I 1911 will have a factory trigger pull of just under five pounds on average, though granted it won’t be polished like a higher priced model.

Many 1911s require a break-in period in order to start functioning reliably, and the RIA G.I 1911 is not an exception here. A break-in of around two hundred to two hundred and fifty rounds should be sufficient. 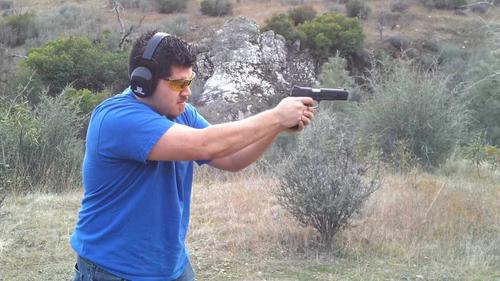 As far as long term reliability is concerned, the RIA 1911 functions the most reliably with standard 230 grain FMJ ammunition. It is more finicky with defense hollow point ammunition, so you’ll want to test different loads with yours until you find one it likes.

You will also notice that the slide will slow down as it accumulates more carbon with extended shooting. This is true with most guns, but you’ll still want to take steps to keep the RIA 1911 clean.

As the sights are very minimalistic on the gun, it can be difficult to hit the bullseye beyond the ten to twelve yard line. As recoil is more muffled on 1911’s in general anyway due to the extra weight, this can help aid in accuracy and particularly with follow up shots.

In short, the RIA GI 1911 is an adequate performer on the range, though you should not expect competition grade accuracy out of it either.

Here is a final summary of the pros and cons of the Rock Island Armory G.I. 1911: