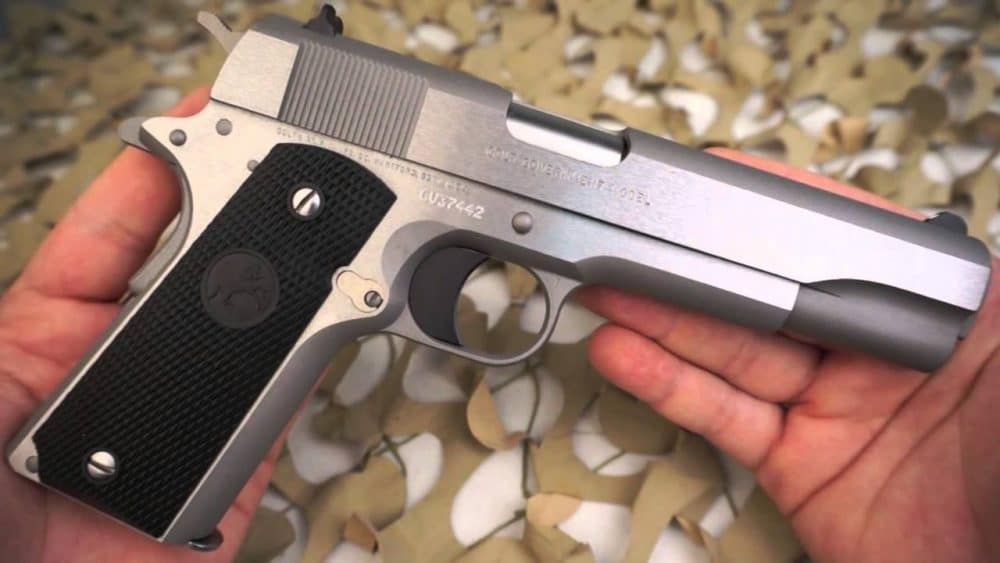 For some reason, there’s just something more fun and classic about saying “Colt 1911” rather than “Springfield 1911” or “Kimber 1911” or “Ruger 1911” or whatever have you. That’s not to say that all other manufacturers of the 1911 are bad, because it’s absolutely not true. Springfield, Kimber, Ruger, among many, many other manufacturers have certainly proven to produce high quality models of the 1911 pistol.

Nonetheless, it was the Colt 1911 that was the original manufacturer of the 1911, and they are still producing many models of the 1911 today. Not only that, but Colts are among the highest quality factory 1911’s that money can buy today, and they definitely command a premium price for it.

In this article, we’ll talk about the benefits of the 1911 platform in greater detail and then outline and discuss the different variants that Colt offers today.

Benefits of the 1911 Platform

Over a century since its introduction, the 1911 remains as popular as ever. In fact, the 1911 is currently the most customizable handgun in the world, and can boast of an even greater aftermarket support than the Glock pistol. 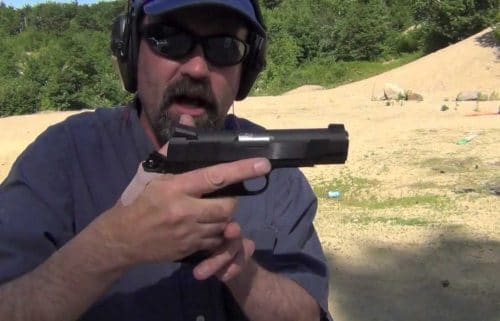 Through all these decades, what has caused the 1911 to remain so widely accepted and in the mainstream?

Well, there are several reasons why, including:

Here’s a quick exercise for you to do: pretend you have a pistol in your hand and hold it up. Pay special attention to how you hold this imaginary pistol.

Now pick up a 1911 and hold it up. Many people report that the grip angle of the 1911 is very close to or identical to how they naturally hold an imaginary handgun. This makes the 1911 feel very natural in the hand.

Yes, the 1911 is a large (and heavy) handgun. But it’s also a very slim handgun thanks to its single stack magazine (at least in most models). This makes the 1911 quite easy to conceal carry, and with a shorter barreled version such as the Commander or Defender, IWB carry only becomes easier.

Many people inexperienced with guns believe that any ‘.45’ is going to have harsh recoil. But that’s just not true with the 1911. On the contrary, the recoil is softened considerably due to the heavy weight of the gun. If you shoot a 1911 in a smaller round, such as the 9mm, the recoil becomes even less pronounced.

The 1911 is a single action only handgun, and the trigger is well known for being very crisp and light. It only adds to the fact that the 1911 is a very pleasant gun to shoot.

The 1911 is already a very accurate gun, and the natural point of aim and moderate recoil only contribute to it being an even more accurate gun in the right hands.

This one really depends on the 1911 you own. Some 1911s can be very finicky depending on the ammunition you use, while others can run flawlessly.

The general consensus is that the 1911 needs a break-in period of 100 to 200 rounds in order to start functioning properly, but in my experience Colt 1911s have always functioned just fine right out of the box. Many others report the same and it’s one reason why Colt is still regarded as being one of the best manufacturers of 1911s on the market today.

Available Models of the Colt 1911

There are many variants of the 1911 offered by Colt today. For a long period of time, Colt was one of the few manufacturers of the 1911 and as a result faced minimal to no competition on the civilian market.

Today of course, it seems that every gun manufacturer out there has at least one 1911 out, but each of these Colts are still a perfectly viable option to choose from: 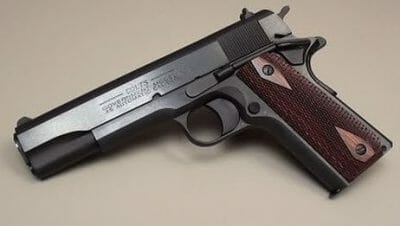 Subsequently, it features a longer trigger and flattened mainspring housing, with a standard G.I style thumb safety on the left side and a shortened grip safety. 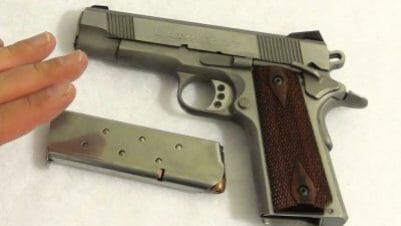 The latest version of the venerable Combat Commander features a beavertail grip safety, G10 grips, and durable spring recoil system that Colt claims will reduce recoil. The barrel is 4.25 inches long to make it more preferable for concealment over a full sized model.

The barrel is stainless steel while the frame and slide are blued. The hammer is a classic style Commander hammer. The Combat Commander is available in both Colt .45 ACP and 9mm. 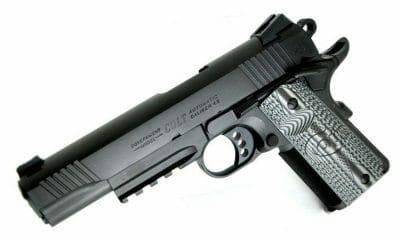 As the name suggests, this version of the Colt 1911 is designed for tactical/combat purposes and sports a rail. It also has the same dual spring recoil system of the Combat Commander, Novak night sights, a beavertail grip safety, an undercut trigger guard, a 1913 Picatinny rail for adding lights and lasers, and checkering on the front strap in order to get a more secure grip in slippery conditions. The Combat Unit Rail is available in both 9mm Luger and Colt 45 ACP. 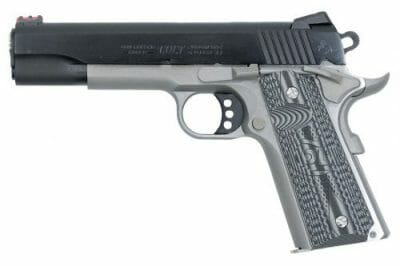 While the Colt Gold Cup has long been considered to be the standard go-to 1911 for competition use, Colt has recently unveiled the appropriately named Colt Competition 1911. Available in both 9mm, .38 Super, and Colt 45 ACP, it is available in a brushed stainless or a matte bluing finish. It is notable for its blue G10 grips, beavertail grip safety, dual recoil spring system, Novak fiber optic sights, and a Series 70 firing system for a lighter trigger pull. 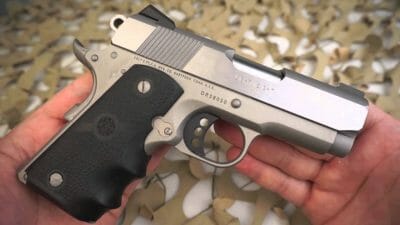 If you’re looking for a 1911 that’s even smaller than the Commander, the Defender could be the answer you’re looking for. With a barrel length of 3 inches and a shorter grip for a magazine capacity of 6+1 rounds (though it can still fit larger 1911 magazines that will extend beneath the bottom), the Defender is available in both .45 ACP and 9mm and in blued or stainless steel finishes. It has Novak sights and a beavertail grip safety. 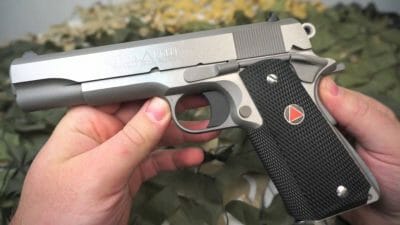 The Delta Elite is a 10mm 1911, and the variant produced today features Novak white dot sights, an extended thumb safety, and a beavertail grip safety. Of course, the blackened grips feature the classic Delta medallions. One version comes with a rail. 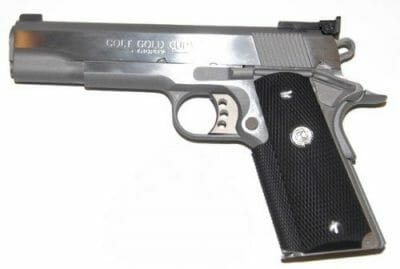 The Colt Gold Cup has long been regarded as one of the finest and smoothest competitions pistols ever made. Produced since the 1950s, the Gold Cup comes installed with an adjustable trigger, a National Match barrel, and fully adjustable target sights. 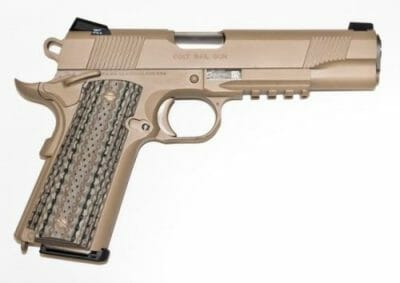 This 1911 saw service in the Marine Corps starting in 2012. It’s basically the Rail Gun but features a tan coating that is also very corrosion resistant. It also comes installed with G10 grips, a 1913 Picatinny rail, and a dural recoil spring system along with Novak tritium night sights. 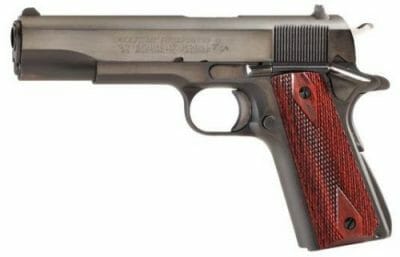 The Colt Series 70 (or Mark IV Series 70) as the name suggests utilizes the Series 70 firing system. The outside look of the gun most closely resembles the classic design of the M1911A1 that saw service in World War II to Vietnam.

As a result, the Series 70 has a shorter trigger, arched mainspring housing, a standard grip and thumb safety, and basic sights. The stainless steel version was recently discontinued, but the blued model is still in production today.

Colt has been making 1911s longer than any other manufacturer and they continue to produce exceptional 1911s to this very day. Each of the variants we have just covered are being manufactured and offered for sale as of the time of this writing.