Gun lube is the heart and soul of firearms maintenance. It should be applied regularly and should be something every gun owner takes seriously.

A Good gun lubricant is an invaluable tool to have. Now there are tons of gun lubricants out there. Hundreds of them. So how do you sort through the garbage and find the goods?

Well, you came to the right place. We’ll do it for you!

Why You Need Gun Lube

Gun lube is primarily designed to do one thing. Reduce Friction. Lube should coat the surfaces of a firearm that are high friction points. This includes the bolt and the rails it rides on. The slide rails and slide itself. These critical friction points must be lubed properly or your firearm may fail or even break.

Reduced friction means reduced wear and tear. A properly lubricated firearm is a long lasting, happy firearm. Without proper lubrication over time these high friction points will absorb so much heat and be hit with so much force they will warp, deform, and fall out of spec.

If you want to keep this from happening I suggest you keep firearm lubricated. Well Lubricated.

Gun lubes reduce friction by adding a level of slickness to the metal. Gun lubes fill in every nook, fissure, crack and cranny to provide complete coverage of your firearm. The components used in gun oil are heat resistant and quality gun lubes will be long lasting.

The gun oil essentially forms a shield between the metal pieces and keeps them from rubbing directly on each other. The boundary agents in gun lubricants keep the lube from being squeezed out of the way when the gun is being used.

Gun lubes often have a wide variety of additives that help the gun in many other ways. Most will contain an anti rust and moisture wicking additive. This keeps moisture from building up in the gun and creating rust. Of course, these additives will only last so long. You have to clean out the wet oil eventually and replace it with fresh gun lube.

These rust fighting lubricants aren’t just for the rain. If you live in the South East, or near a coast a lubricant with moisture resistance is an absolute must have. This keeps rust from building up in the gun from that pain in ass hang in the air humidity.

The third most common function of lubricants is for cleaning. They can often lift built up carbon off the metal portions of guns. This allows an enterprising gun owner to dig in deep and really get the stuck on carbon out of those small holes and tight locations. Lubricants can also help bust any rust that gets built up in the gun.

How to Choose Gun Oil Lube

This is the real question, isn’t it. I like the 3 in 1 gun oil, but that’s just me. 3 in 1 is the lubricating, protecting, and cleaning compound that does just a bit of everything. Others like nontoxic lube that are made from mostly natural substances.

The Best Gun Lubes on the Market.

Hoppes Number 9 gun lubricant is the classic American gun lube. It’s so ingrained in gun culture they even made an air freshener with the smell of it. It’s been around for so long for a reason. It works. It works with rifles, shotguns, handguns, and revolvers. Hoppes Number 9 is a great oil for classic guns.

It’s not exceptionally harsh, and won’t damage wood or polymers. Hoppes Number 9 has been improved upon over the years and formulated to be long-lasting and effective. Hoppes Number 9 is perfect for both cold and hot environments and its simple nature makes it dependable in the long term.

Here is a blast from my past. CLP from Break Free is the choice of the armed forces because it works. It’s harsh, but it is a solid 3 in 1 gun oil. It cleans, lubricates and protects. It’s a long lasting gun oil that works in any climate and at any altitude.

Its well proven for its dependability and its viscosity is second to known. If it can keep machine guns running after thousands of rounds it will keep your AR and Glock running forever. Break Free CLP is a powerful multi-use formula that’s actually pretty cheap, and available in all sizes. 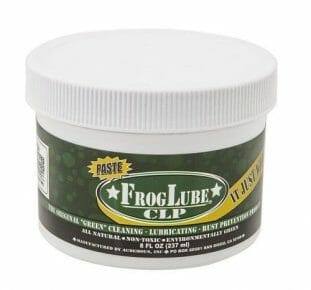 Froglube is a much more modern gun lube. It’s been proven effective by a variety of firearms reviewers. It’s been thoroughly proven and tested in extreme conditions, and it just works.

One of the biggest advantages is that Froglube is nontoxic. It’s also environmentally safe and biodegradable. This lubricant isn’t overly harsh and is likely a little thicker than most are used to.

When properly applied though it works just as well as the harsher chemicals. It does become slightly more liquid like when it gets hot and tends become thicker when it cools. Once cool it is easy to remove and makes gun cleaning simple.

M-Pro 7 gun cleaner is a highly potent, high-end gun lubricant that’s designed to function in high use firearm. This gun oil lube is a high volume 3 in 1 oil that cleans, lubricates, and protects your firearm.

M-Pro 7 is popular among military members for its long-lasting appeal and powerful cleaning ability. It cuts through grime and carbon with ease and makes cleaning even the most well-used guns possible. M-Pro 7 is a high-end gun lubricant that’s surprisingly affordable. It reduces fouling and helps keep your gun running true. 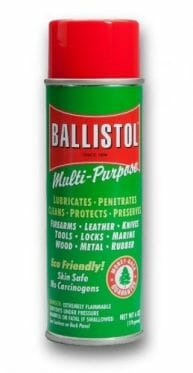 Ballistol Multi purpose cleaner is truly a fascinating lubricant. It manages to clean, lubricate and protect, but it’s also nontoxic and not harsh at all. It can be used on plastics, and woods without causing any damage.

Ballistol 3 in 1 is a potent and effective lubricant that comes in aerosol form. Its biodegradable, safe to handle and works surprisingly well. It even smells nice.

Things to Remember About Gun Lubes

1. They Are Not Miracle Workers

Gun lubes can only do so much. If they are used correctly or applied as needed they aren’t doing much at all. Some guns are also well past their due date, and if they were poorly oiled in the past this due date will come a lot faster.

If your gun is having malfunctions it might be time to break it down, clean it up, inspect it for defects. Once you do that, put it back together and see what happens.

If it’s still having malfunctions after that more lube isn’t going to solve the problem. It’s time for a gunsmith.

2. They Are (almost all) Toxic

A lot of gun oils, and as far as I know all 3 in 1 oils are toxic. This means you likely want to either wear gloves or wash your hands after handling them. If you ingest them or get them in your eyes you may need to call poison control.

Don’t mess around with these oils. Store them with responsibility and keep them away from animals and kids.

Soaking a gun in gun lubricant doesn’t mean it’s going to work better or last longer. Over Soaking a gun in lube can actually cause problems in the long run. Lube tends to attract dirt, dust, and grit.

Those are the last things you want binding up the action of your gun. Too much lube is simply a waste. Plus it gets everywhere, in your hands, on your clothes, and more. Instead, focus on applying lube to only the point where it’s necessary.

We live in a time where the gun industry is booming. This means everyone has a lube to sell. This doesn’t mean they are all bad, let’s be honest it’s hard to make crappy lube.

5. Some are Harsher than Others

Some lubricants can be pretty rough on guns. In most cases, this isn’t an issue. However, when you come to historical guns with wooden grips or stocks you may want to pause for a second.

Some of these harsher 3 in 1 lubricants can harm the wood and old-school finish on these guns. Keep that in mind if you are dealing with an old school antique weapon.

Keeping your guns lubed up is one of the most basic steps in gun maintenance. It’s both preventive and active maintenance. There are dozens of different lubricants out there and a few different types of lube.

It’s a buyers market and a small bottle of lube should be in every range bag and every cleaning kit. I wouldn’t go to the range without it.