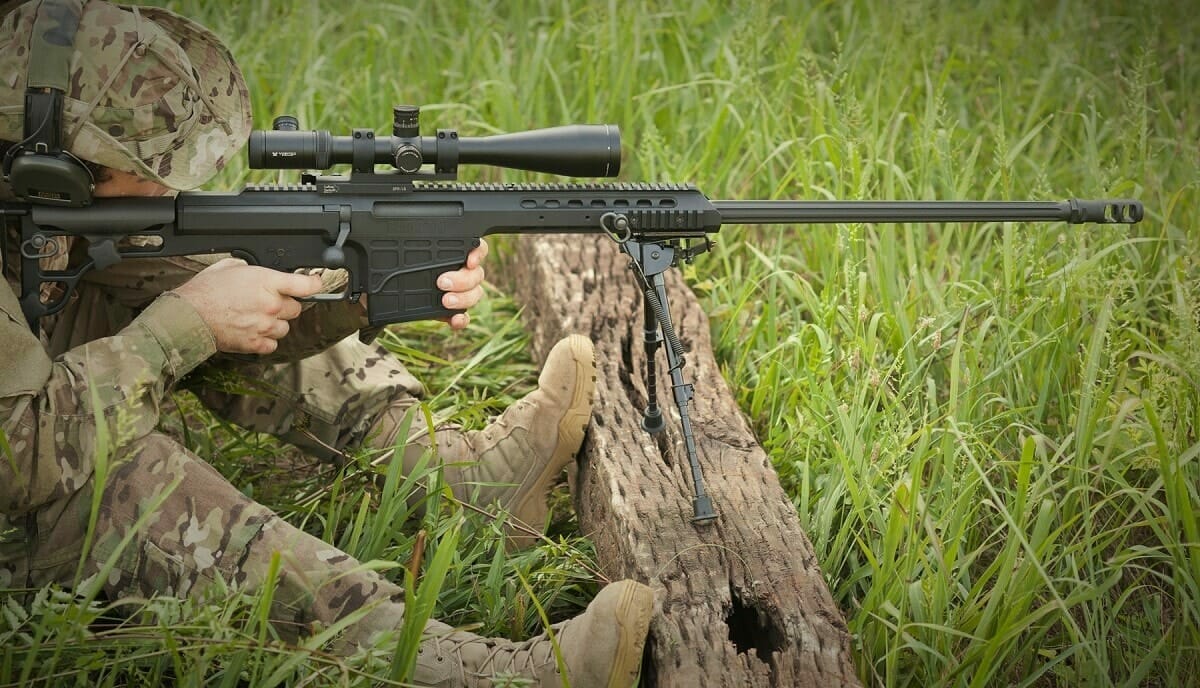 For this cartridge analysis, we are going to look at the .338 Lapua vs .50 BMG calibers.

These two long range rifle calibers are heavy duty rounds that fulfill a very specific purpose in the shooting world. When a shooter needs heavy stopping power over extreme long-distance ranges, he looks for cartridges such as these.

Rather than comparing these cartridges in a way that seeks to value one over the other, we are going to instead evaluate the relative advantages and disadvantages of each one and determine the suitable purpose and situations for each as well.

Although these cartridges are similar and often interchangeable for many applications, we expect to find that many other applications require the specific advantages found in either the .338 Lapua or .50 BMG.

The .338 Lapua Magnum (also known as the .338 LM) definitely has a much shorter history than the .50 BMG. Designed in the 1980s, its development was intended for long range snipers in the military or law enforcement who needed strong terminal ballistics and could penetrate various types and layers of body armor, such as ceramic plates and ballistic mesh weaves, even at extremely long distances.

The .338 LM meets those specifications with amazing range and heavy-hitting power at long distances. Field-tested and proven on the battlefield in both Afghanistan and Iraq, military personnel continue to use this ammunition and civilians have followed their example when it comes to hunting and competition shooting.

The increased popularity of this cartridge has led to options on the commercial market, making it even more versatile for a wide range of shooters. When hunting deer or elk, it can deliver an accurate, deadly shot at 1800 yards so long as you use a quality scope.

The recoil on this ammunition is, of course, considerable. It is not possible to get the distance, accuracy, and ballistic strength without an equal and opposite reaction impacting the shoulder of the shooter.

As far as accuracy goes, it can be a pretty subjective measurement sometimes. The .338 LM cartridge delivers excellent accuracy in the hands of a trained operator. The flat trajectory is ideal for aiming quickly without major adjustments. And although some shooters will claim that recoil does not affect their accuracy, this is a wild boast. You can expect accuracy to deteriorate after heavy shooting without adequate time for recovery using this cartridge.

The cost of ammunition of this caliber is not going to make anyone happy but the market. These rounds typically cost $5 per shot, and the platform required to shoot with these cartridges averages around $2000.

The .50 Browning Machine Gun (.50 BMG) was produced in the late 1910s as the field placement of armored vehicles became more common in European countries during the build up before WWI. The cartridge itself has been made with varying specifications, such as tracer rounds or armor-piercing, but the standard factory issue is the most accessible by civilian shooters today.

Although quite popular for military and police applications, the .50 BMG is also chosen by many non-military shooters and used in non-violent applications. It is primarily used in extreme distance target shooting, but large game hunters also appreciate the accuracy at these large distances, especially when it can increase the standoff distance and keep hunters at a safe distance from dangerous game.

The .50 BMG is a very large round and as such, requires heavy weapons and supporting equipment in order to fire safely and accurately. Civilians can purchase these rounds in factory loads ranging from 650 to 750 grain.

In regards to ballistics, the .50 BMG has a bigger, heavier bullet that delivers a reliable killing shot at ranges up to 3300 yards and take down medium-sized game at these incredible ranges. The bullet hangs in the air for a full seven seconds at this range and has a significant drop in elevation.

Like the other cartridge in this article, you have to expect a serious recoil from the .50 BMG. It’s simply a matter of physics. This cartridge is packed with powder and kicks back with considerable force. Given all other factors are equal, such as training and skill, a rifleman with this cartridge will show closer grouping, but this improvement can be difficult to measure with certainty.

Several rounds from the .50 BMG cartridge can exceed the .9 mark, and the trajectory is nice and flat. And of course, the extreme recoil will impact even the accuracy of the most experienced shooters.

Additional equipment can be added to the platform to stabilize the shots and reduce the recoil, which most shooters will want to consider.

The .50 BMG will really bite your wallet, however. Rounds can cost between $11 to $16 each from most stores, but bargain hunting can potentially reveal wholesale prices as low as $5-$6. You can also save a little by making match ammo, but the bullets themselves can often cost $5 each. Of course, the remaining components will add on top of that price.

The full rifle platform to shoot the .50 BMG will typically cost around $3000. Advanced models will of course be more expensive. If you really want a great, customized option, check out ATRS in Canada – they know their business.

Both cartridges have the velocity needed for long range shooting though the 50BMG seems to show slightly higher velocities and this gap between the cartridges widens as the rounds move downrange.

As far as the BCs go for these two cartridges, both show phenomenal numbers. The 50 BMG does have several rounds that break the .9 and even 1.0 mark, but the 338LM is nothing to scoff at either. Trajectory follows a similar trend where both show very flat trajectories, though the 50 BMG excels in this category as well.

Both of these cartridges definitely have their purpose as sniper rifles or for competitive long distance shooting. Most competitions will not allow a .50 caliber round overall, but the .50 BMG will put out a beautiful arcing shot that can put rounds on target beyond 1000 yards.

Don’t discount the value of the .338 Lapua Magnum, though. It may seem like an inferior cartridge when all of the specs are listed side-by-side with the .50 BMG, but it can deliver nearly equal performance in almost all of the same scenarios. Its accuracy at 1000 yards is easily equal to the .50 BMG, but farther shots will probably require more sight adjustment due to the slightly lower muzzle velocity and more dramatic trajectories.

Mid-range shooting or medium-sized game hunting can be accomplished with a smaller cartridge. The rifles that can chamber rounds this big can also be heavy and cumbersome for the kind of outdoor activity that accompanies hunting, but generally the platforms for the .338 LM are more manageable than those for the .50 BMG.

Some hunters are committed to using the .50 BMG for hunting, and it’s true, it is very successful at bringing down large game such as elk and moose – even dangerous game.

The increased range is an argument in favor of maintaining standoff distances from the game, and this cartridge definitely delivers the power and velocity for it. But the 30 pounds of rifle that the hunter will be carrying around through the wilderness or outback will also inevitably tire him out, possibly before he even gets his first shot off.

As the reader can no doubt tell at this point, it would be pointless to recommend one of these cartridges more than the other for every situation or purpose. In certain aspects and specific situations, one or the other might have the advantage, but each scenario needs to be considered separately.

Both of these cartridges are capable of high accuracy at long distances, and both have extreme stopping power. This article has hopefully highlighted both the similarities and differences so that the informed shooter can make his decisions and buy the appropriate ammunition for his needs.