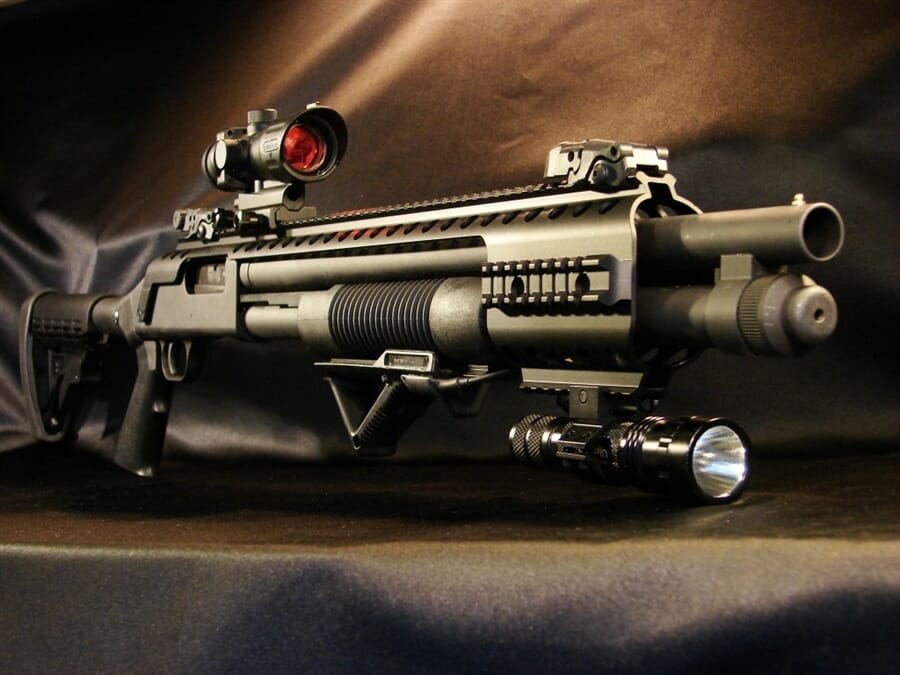 If you’re looking for a home defense that has serious stopping power but won’t break the bank, you might take a look at the Maverick 88 pump-action shotgun.

If you’ve ever seen a shoot-em-up kind of movie, you’ve probably seen a pump shotgun in action.

There aren’t many moving parts that make up a pump action shotgun, so there’s not much that can go wrong with one.

You load it, pump it, fire it, and that’s it! These are usually the cheapest type of shotgun you can buy; double-barrel or semi-auto shotguns are often a couple hundred dollars more expensive.

Oscar Frederick Mossberg started a firearms company (O.F. Mossberg and Sons) with his sons in 1919. Today, it’s the oldest family-owned gun manufacturer in the country.

Their Mossberg 500 is the most popular pump action 12-gauge shotgun on the market. With an average price of $500, though, it might be out of budget for some people.

The Maverick 88 is made from the Mossberg design and with Mossberg parts. It’s even assembled by employees of Mossberg in Mossberg’s factory. So, this isn’t a cheap imitation or knock-off produced by some overseas company in Timbuktu.

The reason for the lower price tag is parts manufactured in Mexico instead of the United States and no option for any accessories to be added to it. The Maverick is just a basic, pump action shotgun. You won’t get a wood stock or a good front bead. There won’t be any swivel mounts for a sling. It’s just a shotgun.

It’s kind of like having an old farm truck to haul stuff with. Maybe it doesn’t have air-conditioning or power windows. But, it’s got an engine and can get you from point A to point B.

Not like your regular driving car, which probably has all those amenities. The truck works, but it’s not as nice a ride as your car. (I can totally relate to this as I have a truck older than my oldest kid!)

As mentioned before, there aren’t too many moving parts to this shotgun. If you need to do more than basic cleaning, you’re going to have to break out some tools and block a chunk of time to do it in.

You might also want to thoroughly read the owner’s manual and search some YouTube tutorials, because it’s not exactly easy.

Because this is a pump action, it scores big in this category. When you’re done shooting, simply run a bore brush through the barrel and few times and you’re done.

The barrel is the only place that might junk up. Every once in awhile, you should pull it apart completely for a thorough cleaning. Wipe it off and that’s that!

Not much to say here, because pump action shotguns always rate high for reliability. They’re like the revolver of the long gun world. Unless you have a catastrophic failure (a possibility in any firearm), it will shoot when you pull the trigger.

That’s one of the excellent points when discussing pump action shotguns for defensive purposes. They’re incredibly reliable when the proper shells are used. If you want to learn more about different types of shotgun ammo, check out our article here.

This is a huge issue for responsible gun owners. On the Maverick, there is a button on the trigger guard to prevent firing. There aren’t any grip or internal safeties.

Therefore, the safety of this gun is the responsibility of the handler. If you have young children in your household, you’ll want to store this unloaded, if possible, and/or behind locked doors.

The Maverick 88 12-gauge shotgun comes with a 28-inch barrel and an overall length of 48.5 inches. It weighs in at only 7 pounds. The 20-gauge shotgun has a shorter barrel; it’s 26 inches, reducing the overall length to 42.25 inches, but this doesn’t change the weight.

With pump action shotguns, you have to make sure you rack it completely to load a shell into the chamber.

This goes for all pump actions; if you don’t properly rack it, the gun will not fire your next shot. It’s important to practice this so it becomes second nature when a defensive situation arises.

I can tell you from experience; my first time using a 12-gauge shotgun to qualify in a gun class, I definitely came away with a sore shoulder!

The Maverick 88 comes with your choice of shoulder stock or pistol grip and a basic sling mount. It’s not like this is a prohibitively expensive shotgun with a hard plastic carry case, extra barrels of different calibers, and loads of bells and whistles. Another great option is getting a shotgun scope.

But, this is a Mossberg 500. Any accessory made for the Mossberg will fit your Maverick. You can switch out the barrel for skeet shooting or customize it in many ways. The only thing that’s not compatible  is the trigger group.

The Maverick 88 isn’t a shotgun for hunting or skeet shooting. But, when it comes to an inexpensive home defense and basic target shotgun, the Maverick 500 might be the perfect option. It’s cheap and readily available and since it’s built of Mossberg parts, you can customize it to suit you best.

It’s an excellent choice for a cheap, quick-and-dirty defensive shotgun that might sit in the closet for years before you need to use it. Properly oiled once in awhile, it will shoot no matter how long it’s gathered dust.

It gets high marks for reliability and customization, but safety is up to the user. Maintenance is quick and easy unless you must fully breakdown the weapon. You’ll also get a basic gun sling with your purchase.

Because it’s made by Mossman, it’s a name you can trust and you’ll get their warranty, too.

2 thoughts on “Is the Maverick 88 a Good Self Defense Choice? We Say Yes.”