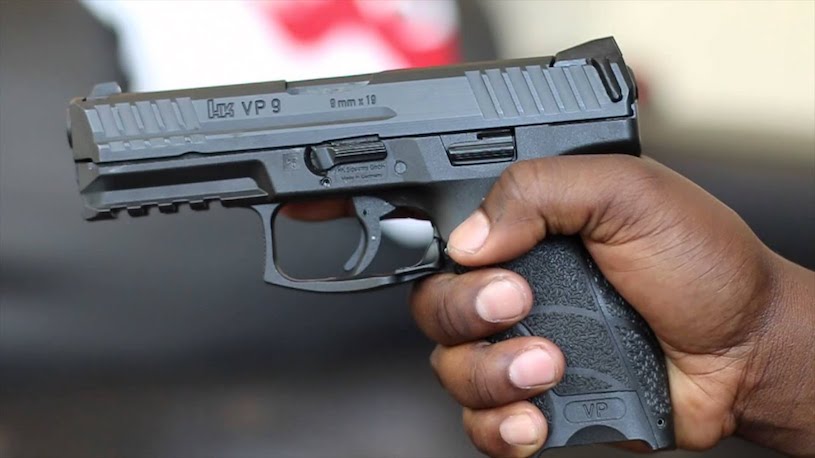 If there’s anything you need to know about the company Heckler & Koch, it’s that they are pretty much synonymous with quality firearms that are in service with military, law enforcement units, and civilians all over the world.

And if you know anything about Heckler & Koch, then you should have heard about the HK VP9 9mm pistol, which was first released to the general market in 2014.

Today, the HK VP9 competes with other handguns such as the CZ P10C, Glock 19, and the Walther PPQ. So yes, it is ‘just another striker fired 9mm pistol’ on the market.

But nonetheless, in many ways the HK VP9 is a very unique offering, and we’ll cover the reasons why in this review.

History of the HK VP9

Contrary to what many people think, the VP9 is not HK’s first striker fired pistol. That title would belong to the HK VP70, which truly was the first factory produced polymer framed, striker fired pistol, beating out the Glock 17 by around a dozen years. 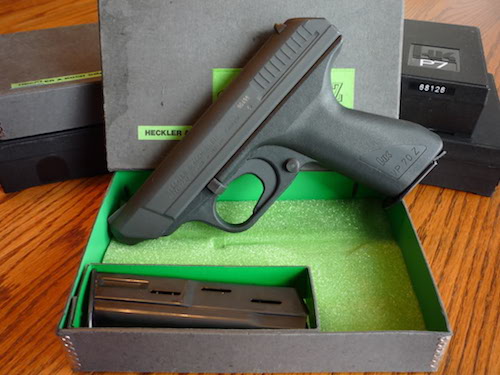 The VP9 was also very far from being the pistol that gave HK a name for themselves. Before, Heckler & Koch had been arming law enforcement units and militaries and security forces all over the world with guns such as the HK MP5 and UMP submachine guns, HK416 rifle, the P7 pistol, the USP and USP Compact, P2000, the HK45, and the P30.

In fact, in many regards, the VP9 is simply a further development of the P30, with the primary difference being that the P30 is hammer fired whereas the VP9 is striker fired.

The VP9 was officially released in 2014 as we noted previously, but it was also in development for many years before then. In fact, HK claims that the VP9 began production in mid-2010. 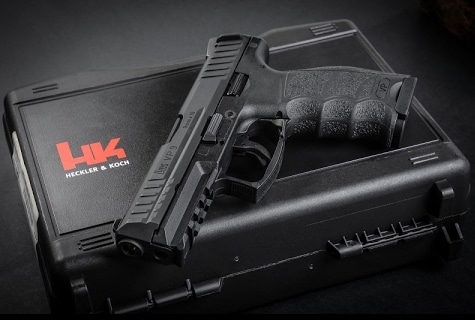 The main motivation for HK to build the VP9 was two-fold. Firstly, the company wanted to make a pistol with a single stage trigger and a clean break, in contrast to their double action/single action autos that they had become famous for before then.

Secondly, the company also wanted to compete better in the United States civilian market. Striker fired pistols have been the rage for years, which meant that HK’s DA/SA pistols were less appealing to several American shooters.

On top of that, HK firearms are notorious for their high prices, with guns such as the USP or P30 costing $800+. With the VP9, HK sought to make a pistol that would appeal to more American shooters while also being offered at a lower price tag. The VP9 is routinely available for around $500+, which is more in line with competing pistols from Glock, Smith & Wesson, and Walther.

Sure enough, the ‘VP’ in the HK VP9 name stands for Volkspistole, which translates to ‘people’s pistols’ to reflect HK’s desire to make a pistol for the American civilian market.

Current VP9 pistols, at least ones made for the American market, are manufactured in Germany but then assembled in the state of Georgia as a result of importation restrictions from the Gun Control Act of 1968.

Design of the VP9

In many regards, the VP9 is nothing overly special. It’s striker fired, has a polymer frame, and a Glock-like bladed trigger safety. 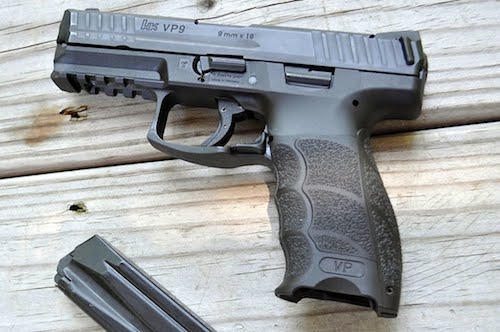 This means that the VP9 is capable of comfortably accommodating a wider array of hand sizes than many other pistols are, which alone is a very neat feature.

Another huge feature of the VP9 is its single stage trigger. When the Walther PPQ was released in 2011, there was wide consensus that it had one of the best triggers of any striker fired pistol on the market, being lighter and crisper than comparable options such as the Glock 19, Smith & Wesson M&P, or Springfield XD.

If there’s any pistol that comes anywhere close to the PPQ’s trigger, it’s the VP9. Many shooters report that that the VP9 has a shorter take up than the PPQ but a slightly less crisp break. Still, the VP9’s trigger, out of the box, is widely regarded as being superior to the Glock or Smith & Wesson M&P’s trigger, which is something you may expect out of high quality German engineering.

Another feature of the VP9, and something that is very unique to it, is the charging ports that stick out of the side of the rear of the slide. These are designed to make the slide easier to rack in wet and adverse conditions.

Magazines of the VP9 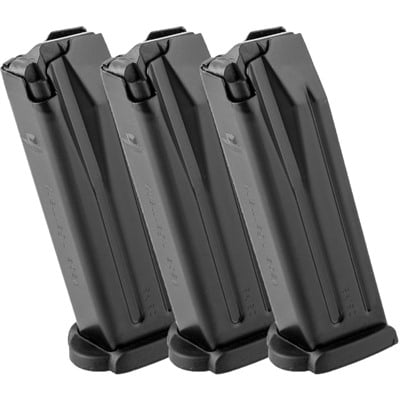 It was a wise move on HK’s part to ensure that the VP9 accepts the same magazines as the P30. The convenience here for HK is they have less types of magazines to make, and for you, it means that you can own both pistols and yet only need one type of magazine.

The magazines are very high quality and have been subject to a number of torture test such as drop tests over cement, and they continue to function very reliably. The magazines are built out of metal with a polymer base plate

The magazines are also manufactured by HK and not by a third party manufacturer such as Mec-Gar, as is the case with many other pistols on the market today.

One thing about the VP9’s magazines that many people don’t like, however, is that they only hold 15 rounds.

While fifteen rounds may sound like a lot, the truth is that the VP9 is roughly the same size as a Glock 17 or a Canik TP9, which hold 17 and 18 rounds respectively. The VP9’s grip is also larger than the grips of the 15-shot Glock 19 and Walther PPQ, which is why many people ask why HK did not increase the capacity of the weapon.

The answer to this question is that HK magazines have a slightly lower capacity than their competitors. For example, the full size USP9 holds 15 rounds and the USP40 holds 13, when they could easily hold more rounds in the magazine. 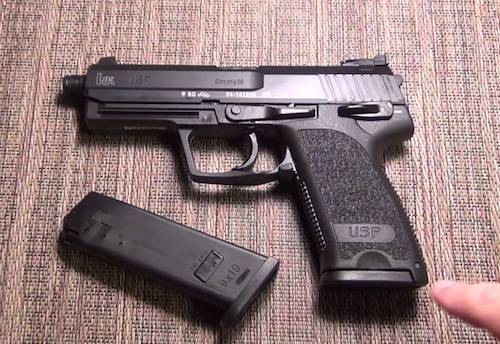 HK claims that making their magazines hold slightly less bullets extends their overall lifespan before needing to be replaced because there will be less pressure exerted on the springs. Is there any truth to this idea? Maybe, maybe not.

But still, 15 rounds of 9mm is an impressive amount of firepower, and losing 2-3 rounds is not that big of a deal. You can reload a pistol, can’t you? If so, then there’s not really anything to complain about.

Another negative about HK magazines is the price. They are very expensive, and you can expect to pay $40 to $50 for a single P30/VP9 magazine, in contrast to other magazines from other gun manufacturers that can be had for around half that price, if even less in some circumstances. It’s just something that you’ll need to be prepared for.

There are many current variants to the HK VP9 that are offered on the American market today. These include:

This is standard base model of the VP9. It ships with standard three dot sights and two 15-round magazines. 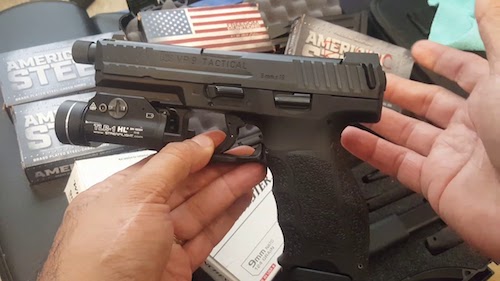 This is the same model of the standard VP9, except it ships with 3 magazines and the three dot sights are metal tritium night sights. It’s meant for law enforcement units but is available for civilians as well. In all honesty, the ‘Law Enforcement’ variant name is really a marketing gimmick, as you can easily buy an extra magazine and replace the sights on a standard VP9 to make it the LE version.

This version of the VP9 ships with three magazines, has night sights, and a threaded barrel to attach a suppressor. It also has a heavier recoil spring, which supposedly makes the weapon more reliable.

This variant of the VP9 has a traditional push button magazine release over the ambidextrous paddle European style magazine release. Take note that the VP9B requires proprietary magazines, because as a result of the push button it cannot accept standard P30/VP9 magazines. 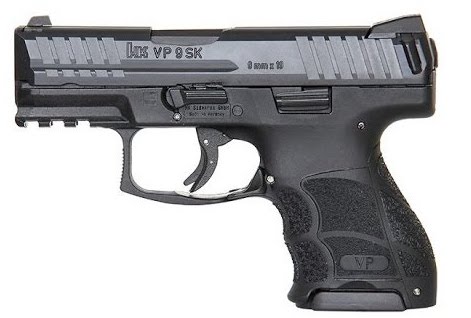 The VP9SK is a subcompact VP9 with a shorter barrel, slide, and frame. It comes with two ten round magazines, but it will accept standard 15-round magazines that will protrude beneath the barrel. The VP9SK would serve as a good concealed carry piece or as a backup weapon to a larger VP9 pistol.

Sure, the VP9 may be just another striker fired 9mm pistol. But it’s also very ergonomic and has an excellent trigger pull, which makes it a strong contender in an increasingly crowded marketplace.