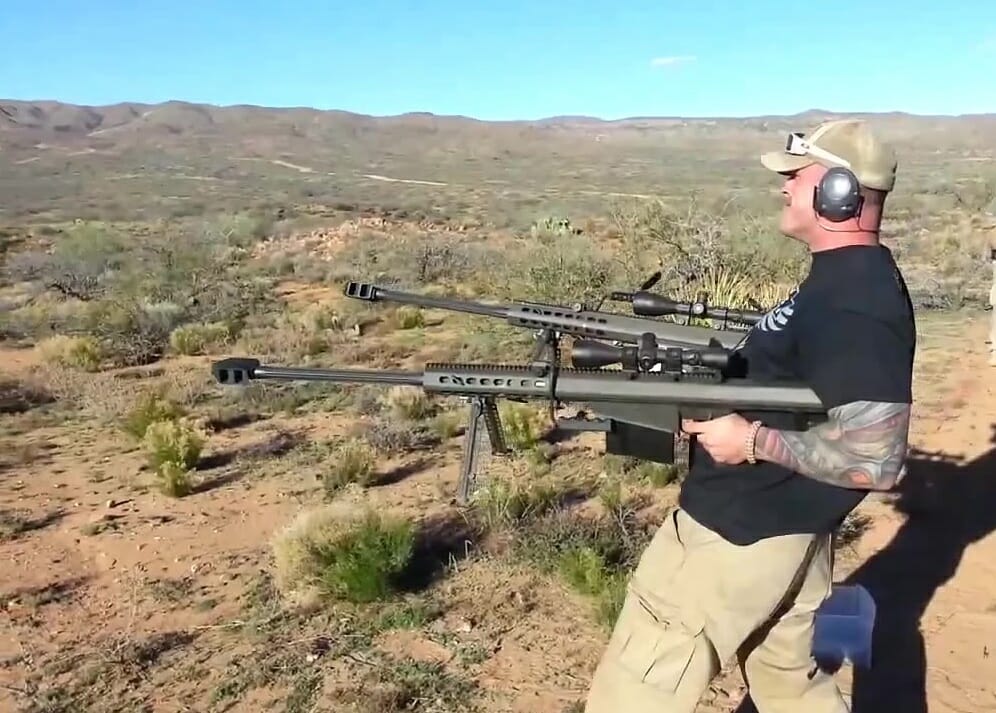 You know why I love America?

It’s the only country in the world that would allow me to own a 50 BMG rifle, a 50 caliber handgun, and buy both in afternoon. I’m proud to live in a country that trusts its citizens with that kind of freedom. I’m also proud of the firearms industry and their constant need to create bigger and better guns and calibers.

The NFA and some associated gun control acts limit the size of a projectile a weapon can fire to half an inch, aka 50 caliber. There are some sporting exceptions for shotguns and big game rifles, but in general anything with a bore over .5 inches is an NFA weapon.

Anything larger than that and it’s subject to additional regulation. So if you don’t want to deal with the NFA and want to own something completely ridiculous you need to check out the 50 BMG.

The 50 BMG, or 50 Browning Machine gun was a round designed right around the end of WW1 as an anti tank caliber. It was to be loaded into the M2 machine gun and to bring the wrath of Ares down on anything unlucky enough to get in front of it. The M2 and 50 BMG round have served for nearly 100 years.

Now buying an M2 machine gun is a bit of a hassle, also subject to the NFA and a few hundred thousand dollars. The 50 caliber round did just happen to find its way into the hands of Ronnie Barrett who decided he wanted a lighter weight, more accurate platform for the 50 BMG. 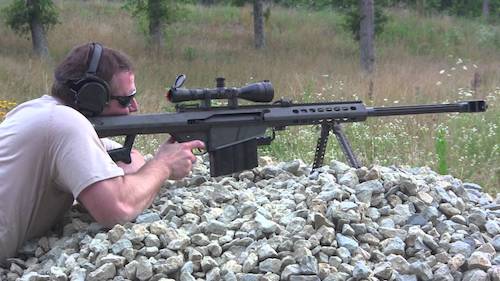 He did what any America would do, he started a business, and he succeeded. The Barrett 50 caliber rifle has gone on to serve with military and police forces around the world. It also inspired dozens of other 50 BMG rifles and now there are even 50 BMG matches held around the country.

This awe inspiring round is absolutely devastating and if you’ve ever wanted to toss half an inch worth of metal at a few thousand feet per second then a 50 cal rifle is for you. Which particular one?

Any will work, but my personal favorite is going to be theBarrett Model 82A1. This semi automatic magazine fed rifle gives you the ability to launch a half inch of lead in a very rapid manner. One big bullet flies down range with every pull of the trigger. What’s not love?

I imagine this round came about from a group of large game hunters sitting around, smoking fine cigars and wondering out loud, “What would it take to kill a T.Rex?” 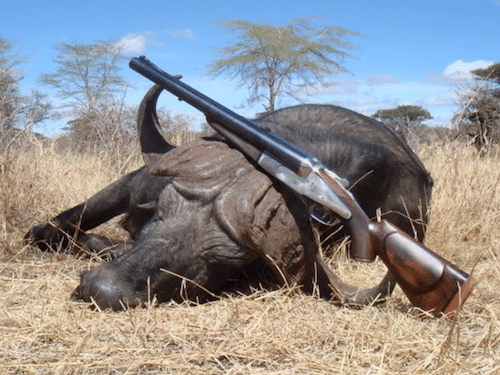 Apparently someone figured it out and the round they came up with isn’t designed for the faint of heart. Some rather hilarious videos are passed around online of unprepared shooters rocking and rolling with the .577 Tyrannosaur. A one can expect the results are quite funny.

The truth is the .577 Tyrannosaur was designed for guide guns. Guides who routinely escort clients looking to hunt and kill dangerous game are responsible for a few different things. Of course they got to find the dangerous game, but they also have a responsibility to protect their clients.

The .577 Trex is designed to stop the largest, and meanest game mid charge. It’s not a round that preserves the flesh and meat of a target. The 577 Tyrannosaur absolutely destroys the flesh and hide of anything sad enough to cross it.

A round like this is only for the most serious shooters. It can be handled, but you have to be an experienced shooter used to these heavy recoiling hunting rifles. A-Square was responsible for designing the round, and they seemed to like the punishment it doles out.

Even in the hands of an experienced shooter the round is a challenge to shoot accurately. However, if its being used as designed then recoil isn’t the biggest issue to worry about. That lion charging at you is likely a bigger concern.

So if Jurassic Park ever becomes a real thing become a prepared hunter with the 577 Tyrannosaur.

The AR 15 is a truly amazing design. It’s insanely modular and a standard AR 15 lower receiver can handle dozens of different rounds. It can even handle big bore rounds like the 458 Socom. The 458 Socom was initially designed for close quarters fighting, with the fighting done by special ops troops in Afghan caves being the primary focus. 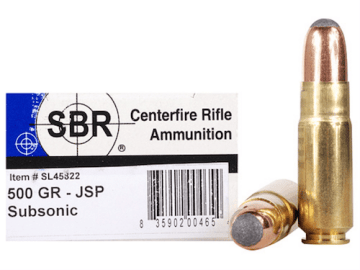 The 458 Socom was designed to increase the likelihood of one shot kills in close quarters fighting. Part of the design philosophy behind the round was to make it as compatible with a standard AR 15/M4 as possible.

The 458 Socom proved to be compatible with a standard upper and lower and the biggest change was the barrel, bolt and gas system. A complete upper receiver makes a conversion to 458 Socom take only 30 seconds.

In fact, a standard AR 15 magazine is completely compatible with 458 Socom rounds. Although the capacity decreases from 30 to 10 or 9 rounds of 458 Socom. Although, it lacks the range of the 5.56 the brute power of the 458 Socom isn’t something to trifle with.

If the words Big Bore AR excite you then I encourage you to take a peak at a 458 Socom upper receiver. It’s great for hunting, killing terrorists, and showing just what a standard AR 15 can do.

Ever want to hold the power to kill a Greek god in your hand? If so, here is the S&W 500 magnum. This is the most powerful production handgun cartridge and revolver in the world. You can fire 5 rounds of pure Zeus killing power from one of these hand cannons. 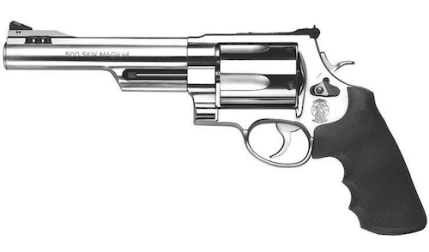 More realistically you can take almost any animal in the world with a gun like this. It turns bears bearable, and effectively slays mammals, reptiles, and just about anything else that is unfortunate enough to cross your path.

If you are a new shooter then this thing isn’t for you. If you get cocky and think your tough it will quickly remind you that you’re only a punch in the face away from realizing you need more practice. The S&W 500 magnum is found in handguns and rifles. Even in rifles it challenges the average shooter.

With the right round a 400 grain 500 S&W magnum round can hit with almost 2,900 foot pounds of energy. That will take a bear, an elk, a buffalo, and more depending on your ability to shoot. If you are shooting a mighty hand cannon you better know how to shoot too. The heavy recoil means follow up shots won’t be rapid, so that first shot needs to count.

The S&W 500 was an attempt to make an even more powerful round and it succeeded. The revolvers chambered in this cartridge are powerful, massive, and expensive. Admittedly this is one of the cheapest calibers on the list.

However, compared to normal people bullets its pretty dang costly. Its an overpowered round for the everyman, as long as you don’t plan on firing more than 10 to 20 rounds per range day.

If you don’t give a heck about the NFA or common sense then the Anzio 20mm cannon/rifle is for you. Seriously a cannon like this requires an NFA tax stamp which does include a 200 dollar tax, an extensive background check, and several months of waiting. If you are willing to pay it, and wait that time the Anzio 20mm rifle is for you. 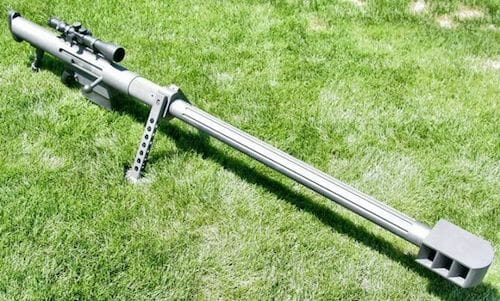 As far as I know the Anzio 20mm rifle is the most powerful rifle in the civilian world. Each one is custom made and dwarfs a 50 caliber rifle. If you ever sat back and thought, “Man that target a few miles away really could use a big hole.” then the Anzio 20mm is for you.

Anzio makes both single shot and magazine fed bolt action rifles, and even suppressors for this man cannon. 20mm rounds are most commonly used in miniguns equipped to battle ships and fighter jets. This thing isn’t playing around.

A 20mm round can reach out to 5,000 yards on average, so you better be a good shot to make it work. If you have the skills there isn’t much you can’t hit with a rifle like this. Ignore the fact you are shooting a round designed to kill tanks and it doesn’t seem so insane. 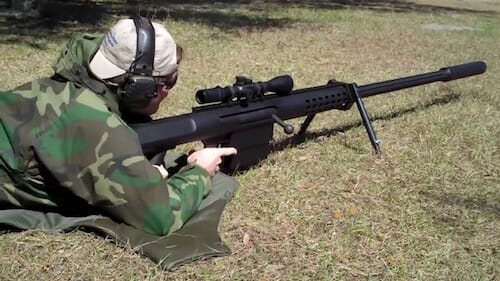 Custom 20mm rifles start at around 10k, so you aren’t just investing in a ton of power. The Anzio 20mm rifle has been adopted by the FBI to fight the future war on kaiju or for anti material work. Anzio’s custom rifles are truly worth every dime. They are handcrafted and built for supreme accuracy and reliability.

Anzio rifles are built to last and built to function. They are also built to order. They are an impressive feat of engineering and by all standard all standards extremely well made rifles. If you need to kill Mount Rushmore this is the gun to do it. Don’t forget a rock solid scope.

Oh America you beautiful crazy country. You may not be perfect, but I really enjoy the fact there is a path to ownership for every gun on this list.

I’m glad to live in a country where the question ‘why,’ doesn’t have to be answered. These are my favorite completely ridiculous and overpowered guns and ammo selections.