If you want to go coyote hunting, or at least need a suitable firearm and caliber for coyotes, then you’ve come for the right place.

Without question, the best basic type of firearm for coyotes is a rifle, due to its higher velocities and capabilities of reaching targets at longer distances.

In this article, we will outline and discuss the best rifles calibers suitable for coyote hunting, and then the best makes and models of specific rifles for you to take into consideration.

The Best Calibers For Coyote Hunting

Here are the best calibers for coyote hunting, ranked in order of overall stopping power:

The .17 Hornet is widely used as a varmint and pest control caliber across the world. Even though it’s a rimfire cartridge and not too much more powerful than a .22 LR, with the proper grain of bullet (20-25 grains) and when used within reasonable distances (within 200 yards or so), it is perfectly suitable for coyote hunting.

Another advantage to the .17 Hornet is the fact that recoil is borderline non-existent, and it’s also a highly accurate round.

The .204 Ruger is a relatively new caliber, being introduced in 2004, but it has quickly gained its own following thanks to the fact that it is marketed as being one of the highest velocity rifle calibers in existence.

There’s no question that the .204 is a very fast and flat shooting round, and is therefore highly accurate as a result. All in all, the .204 Ruger is an excellent choice for coyote hunting as well as for precision shooting in general. 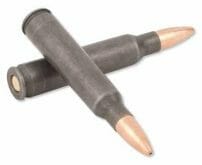 Here’s a caliber that you probably expected to see on this list. It has a flat trajectory and high velocity, much like the .204 Ruger, which combined with 70 to 80 grain cartridges makes it very effective for use against coyotes. The .223 Remington, or the incredibly similar 5.56x45mm NATO, will be effective on coyotes out to four hundred yards or even a little more.

The .243 Remington is another popular caliber that is used on coyotes. Like the .223 and .204, it offers flat trajectory combined with fast velocity (almost 3800 FPS) to bring down game at relatively long distances. As long as you use the 95 to 100 grain bullets as well, the .243 will preserve much of its accuracy even when it is very windy out.

The .30-30 Winchester is most famous (and popular) for being used as a deer hunting cartridge, and specifically in lever action rifles. In fact, the .30-30 has probably killed more deer than any other caliber, and if it’s good enough for deer, then you can be certain that it’s good enough for coyotes too. A lever action rifle chambered in .30-30 Winchester will simply be a superb choice for hunting coyotes in the woods or thick brush.

The 6.5 Creedmoor has gained a following thanks to its excellent performance in long distance shooting out to 1,000 yards or more. With the proper ammo selection, it’s an excellent long range choice for coyote or even larger game up to deer and elk.

The .308 Winchester is probably the largest caliber you should use for coyote without risking tearing up the hide. .308 ammo is relatively inexpensive and widely available, and it’s highly versatile since it is also very effective against deer and elk.

The Best Rifles For Coyote Hunting

The following makes and models of rifles are known for their quality and fire one or more of the above calibers. Presented in alphabetical order:

When you think of the .223 Remington or 5.56x45mm NATO, the AR-15 is probably the first rifle that comes to mind, right? The AR-15 is simply the best-selling rifle in America today, and is available in a very wide variety of configurations and barrel lengths, with 16.5, 18, and 20 inch barrels being the most common.

Virtually any AR-15 will work as a coyote gun. For budgetary options, the Del-Ton DTI 15, Ruger AR-556, Smith & Wesson M&P15 Sport II, and Mossberg MMR Hunter represent some of the best choices available. For those of you willing and able to spend more money, companies such as Colt or Daniel Defense represent the best the industry has to offer.

For a .30-30 rifle in general, it’s hard to beat the Marlin 336. The second best selling lever action rifle of all time, the Marlin 336 is distinguished from the competing Winchester 1894 mostly in that it features a side ejection port rather than a top one.

This gives you the option of mounting a scope, and furthermore reduces the chances of you being hit in the face with an ejected shell.

The Remington 700 is only the best selling bolt action rifle worldwide, and the SPS Varmint model is made specifically for the purpose of taking out, well, ‘varmints’ such as coyotes.

In continuous production since 1962, the Remington 700 has a nearly limitless array of aftermarket parts and accessories for you to customize your rifle with. The SPS Varmint model in particular is offered in the .22-250 Remington, .223 Remington, and .308 Winchester calibers, each of which is more than suitable for taking out coyotes.

A .243 model would be an all-around good choice for coyotes and other varmints. One major appeal of the Ruger American beyond its price is the fact that the trigger is user adjustable so you can make it as light as you want to be. The magazine is also detachable, and even with models that are not sold with a scope, the scope rings are still provided. 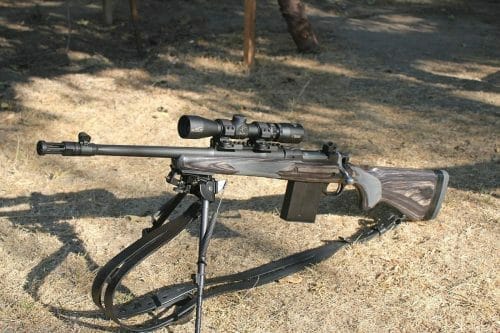 The Ruger Gunsite Scout Rifle, or GSR for short, is essentially the Scout rifle version of the popular Ruger 77 Hawkeye. As such, it features a detachable magazine, a Picatinny rail forward of the receiver so you can mount an optic of your choice with plenty of eye relief, and a shortened barrel.

The GSR is also available in a myriad of different calibers, including the .308 Winchester, 5.56x45mm NATO, and the 6.5 Creedmoor, each of which is a good option for coyotes.

Another great budgetary option, like the Ruger American, is the Savage 11/1111 Trophy Hunter XP rifle. This rifle ships with a Nikon scope for the $500 or less range. It is also available in ten separate calibers, with .223 Remington, .22-250 Remington, .243 Winchester, and .308 Winchester being the four best options for coyotes.

The fact that this rifle ships with a scope and scope bases and rings, and is already factory bore sighted, means that it is a perfect solution for new hunters. And don’t think that the scope it ships with is poor quality by any means.

On the contrary, Nikon has been producing some excellent scopes for years and the specific one that ships with the gun is a 3-9x40mm scope with a BDC reticle.

The Winchester 1894 is a solid alternative to the Marlin 336. In fact, it is the bestselling sporting rifle in history, and is noted for its lightweight, narrow design, portability, smooth action, and excellent fit and finish. For a brush gun or a woods gun, a Winchester .30-30 is one of the best options for coyotes out there.

Coyote hunting is a lot of fun, but you need to make sure that you have a high quality rifle and the proper ammunition to do the job. Any one of the calibers that we have listed will be effective on coyotes, and any of the rifles described above for those calibers will most certainly get the job done.

3 thoughts on “Top Coyote Guns to Keep Your Livestock Safe”